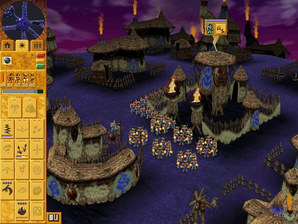 
​
+
Some interesting features (use more than one worker to build at once, you can select all (or five, or one) idle/housed/busy units of one type using the followers tab in the sidebar, mana - having a larger amount of braves/workers makes it regenerate faster, you can turn off some spells temporarily to charge mana faster, priests convert enemy troops, terraforming - raise/lower land with spells and create volcanoes, convert NPCs (wildmen) to your cause, guard towers (and heights?) increase Shaman spell range, regenerating woods and wildmen (neutral people who can be converted to your tribe), rotate building plans before construction to change which way the entrance faces, rotatable camera, you can zoom out to view a large portion of the level at once (icons will help show what's going like in dungeon keeper), buildings can be dismantled for more wood), fairly subtle notifications for important events)
fully 3D world (each level is a planet)
nice cutscenes
fairly lighthearted tone (slapstick, over the top acting, cute sprites)
good tutorial overall (pop-ups pausing gameplay (and canceling selected commands) is a bit annoying and these keep happening throughout the early levels of the campaign)
decent interface (similar to Dungeon Keeper - mouse-look/rotate, zoomed out map overview (Enter), info tabs when units move into battle, home key (H), etc.), pretty fast paced, innovative hero/shaman system which is similar to the one in WC3 - all Shamans have the same stats and abilites here though, waypoints/queued tasks (ctrl+click, can be used with spells (to keep one spell selected) and building plans), skippable in-game cutscenes (flybys), control/command groups (shift+# - only six though; you can also select multiple control groups using ctrl+#), zoom (only two view settings though) and speed options (shift+zoom keys - should've been in the options menu as well), move view to the shaman (press "." or right-click her icon) or a control group (alt+#), some advanced commands (set camera points (save a location to move the view to on command, shift+z/x/c/v=up to four points), send selected units to the nearest building of the type selected (shift+LMB with selected units on building icon), force one unit out of a selected building (shift+LMB on building)), 22 different spells (most of them useful, some of the more interesting ones include invisibility, the aforementioned terrain shaping spells, tornados), get to choose in which order to tackle some level (16-19), long campaign (25 missions), some interesting missions (temporary alliance with another tribe, shaman only, shaman imprisoned, race to the totem containing a powerful spell, etc. - no holdouts or escort missions though), cool final level (the shaman becomes a deity and fuses with the player (means spells have unlimited range and she can't be killed), only thing missing is a boost to mana generation),

+/-
Having to wait for mana to refill (helped by turning off spells in the sidebar and by breeding more workers/braves) or the Shaman to resurrect (shaman regeneration works similarly to WC3)
only one race/faction (post Warcraft 2 and C&C 1-2)
peasants/braves die extremely fast to warriors
easy to quickly take out a shaman (for example by knocking her into the sea with a simple blast spell - can be annoying but can also turn the tide of battle if you're about to lose and counters the problem with every battle being mostly about who has the bigger army)
some spells have limited charges in the campaign
only one spellcaster, priests seem overpowered (in AoE 2 they could still be attacked until the conversion of a unit was completed - not the case here), pretty abstract/arcadey setting besides the cutscenes (small worlds, it's not shown how your tribe travels between worlds, very little focus on civilian life, no character development or NPC dialogue, mostly short and generic briefings), only two resources (wood and mana), save/load anywhere (nameable slots - not that many though), only guard towers can be moved to with the camera (using space bar) following an alarm (an attack on or near the building/unit in it), need to reset a control group key for the shaman if she dies, you can pause and still move the camera around/zoom out at will, can't build on ground where a building was destroyed for some time, introduces fog of war at level 9 (but doesn't keep it for the rest of the game), fire warriors can shoot longer than they can see, few unit types and no upgrades, converted units auto-move to your home circle, no building prerequisites in the campaign, missing some interesting things from the prequel (merging units/followers into the leader/shaman to turn it into a killing machine, much faster terraforming, etc.), can't see enemy unit/building hit points, no scouting spell (see Dungeon Keeper or Warcraft II), followers who are determined to be stuck by the game can eventually die if you don't free them on time (doesn't take that long either), you get notifications on spells being cast on the map even if they were cast on a computer player (there's also no distinction between icons for your priests converting enemies and vice versa), matriarchal tribes only

-
Some pathfinding issues around slopes and narrow areas
the game doesn't save your resolution settings after exiting to windows
lacking many hotkeys and other features ("attack move" and "build structure" keys, specific spells/buildings/units, rally points, etc.)
control/interface issues (shaman will forget a spellcasting command if she gets knocked over after the player picks a target but before casting (instead of casting after landing/getting back up), loading and unloading boats is a bit clunky, can't target a moving unit with spells outside of your current range and have the shaman remember where it went (instead she targets the ground where the unit was when you clicked), no voice warning when your shaman is about to die or gets attacked, no voice warning for when the enemy is converting your troops, units/shaman can't escape from battles (need to use a spell to create some distance between you and the enemy as the shaman), can't use right shift (only left) to quickly scroll with the arrow keys)
some spells are really annoying (blast affects your own units (throwing them around), bug swarm scatters units all over the place, etc.)
​some visual effects get in the way and can't be turned off (every time you get another charge of a limited spell or when you find a new building there's a distracting animation and a loud sound is played), no difficulty options, some trial & error (wildmen sometimes don't regenerate (might be a bug), wildmen can randomly die after a while if not converted, various mechanics, traps after praying to obelisks/stone heads/totem poles - can kill your shaman), can't change the ambient sfx volume individually, almost no control options (can't change default scroll speed or tooltip delay speed for example), can't delete all pop-up icons at once, need to hover oveer/right click units to check their health (besides the shaman), can't zoom back in to the closest view after zooming out on my PC (=/- don't work on a swedish keyboard, "+" zooms out but you can't zoom back in; means you also can't change game speed properly), unit movement can get really slow in steep slopes, shift+enter skips the zoom in/out animation (why not let the player make it the default?), sometimes dumb AI (enemy often lets you live after major battles in the campagin, units don't always react to being hit by a fire warrior, enemy AI is often stupid about Shaman use and protecting key points), can't see how long until your shaman revives?, some annoying sfx (shaman screams), some unbalanced spells (swamp and magic shield are very strong, erode/lower land is a bit unreliable), few music tracks (can't switch between them on the fly like in C&C),