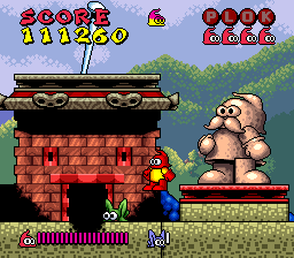 ​
+ Pretty fast paced, great sound quality for the music (tim follin), pretty good bosses overall, difficulty options (just two though - normal and easy), attack while moving, homing helper hornet attack (X - look for something flying above plok's head) and charge attack (hold l/r - get it later on), shows bosses' health bars, decent variation (mixes in search and destroy missions (way too many unfortunately) and a few vehicle segments), suit power ups that give you new attacks (for example a shotgun with some spread), bonus levels (race against the clock in a chopper) - found by hitting the purple fruit instead of grabbing it, play as Plok's grandfather in a flashback story sequence (good way of keeping the storytelling interactive), some nice environments like the caves/akrillic area,

+/- Some odd mechanics (lose all extremities if you attack four times and fall or attack a certain icon near a hanger (literally) in the air), you only take some damage and get bounced back from falling into the sea, life refills between levels, short levels overall, hub world (SMW style), limited continues, unforgiving hit detection near platform edges (compared to most other platformers), can't run, can't jump down through platforms which you can jump up through (not used for puzzles, sometimes leads to backtracking), can't jump attack enemies, somewhat forgiving hit detection vs. enemies, no overall timer (time limited suits though), can't attack upwards or downwards

- Poor jump height control (one short and one tall jump/somersault), can't attack while performing the somersault, very short invincibility time after taking a hit (and enemies tend to do a lot of damage), messy art direction (poor shading on most objects and sprites, odd mix of styles, garish colors overall), enemies become too resilient in the second world, trial & error (traps at the beginning of levels, leaps of faith (can't look up/down), fast traps and enemy attacks, fast and/or weird moving platform patterns), somewhat annoying player damage and death sfx, easy to waste the sawblade power up by mistake (it depletes if you hit a wall/end of an area and is often placed near one), no save or password feature (the game is 2h+ long if you do everything), annoying how switches take away your limbs and puts them on hangers earlier in the level, no timer or other indicator on the suits, annoying how you auto-slide down slopes when without limbs, penkino (?) boss is interesting but takes too long to kill, somewhat loose scrolling in the car and bike segments, somewhat slow tank segment,