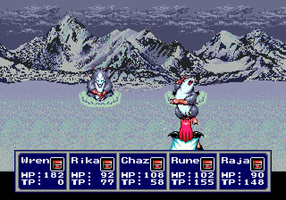 
​
​
+
Nice manga style cutscenes
Macro system (let's you program your party's behavior, later used and developed further in FF12)
Combo attacks (which are quite tricky to pull off but very rewarding)
Sidequests (bounty hunts - also later used in FF12)
Lots of techniques (magic) and skills
Good bosses overall
Interplanetary travel (PS1)
Escapipes/telepipes (let you teleport between towns and out of dungeons)
You can let the party talk to eachother to recoup on the main story if you forget something
Death of a main character pre-FF7 (though it is the 2nd time for PS it is executed better here)
Good art direction
​You get to ride some cool vehicles (PS1) and even fight using them
Some good humour
More equipment customization (choosing between 2-handed weapons or dual wielding weapons, 1 knife one shield, or even dual wielding shields)
Fast paced overall for the genre and time
Strong female character in Alys
Pop up message shows the name of each new area entered
Some dialogue is different depending on who's the party leader
Pretty good interface overall (fast menus, memory cursor in battle, speed options, talk amongst the party to get minor clues (good for picking up old save games))
Some hidden items
Equipment with status/elemental effects and creatures with elemental/damage type affinities
Shared item inventory (it's also larger)
Basic in-game world map (only in JP ver. unless you use the Arrange hack and the default view is always the map's wrapping point which is a little disorienting)
Item drops from monsters
One meaningful dialogue choice (anger tower)
Better at showing the effects of your actions on your surroundings than PSII

+/-
Characters learn spells/skills automatically through leveling up
Techs are gained automatically
Specialized characters
Some overpowered techs (cross cut, miracle, barrier)
No formation system (back/front row, enemies usually go for the party leader though so that's one thing to keep in mind) - order matters insofar as the appointed leader of the party taking more hits from enemies
Effects from spells which modify the same stat don't stack (last one overwrites the previous one)
Much more straightforward and short initial dungeons than in PSII
Starts off very linear

-
Some grinding required
Very frequent random encounters
No curative for KO or TP early on (and only one skill, Ataraxia, can be used later (only by Raja and only in battle)) - have to rest at an inn
Somewhat primitive interface for such a late title (no sorting of items, limited inventory and it's kind of slow, when shopping you can't see if a piece of equipment actually benefits your characters - only who can use it+can't see what you're currently wearing, no item stacking, no explanation of spells (items are explained though), shortened spell names (they're already odd to begin with), you can't see who's turn it is in battle - making macros/combos more frustrating to use, can't see the duration of status spells during battle, one item at a time in shops, no in-game explanation of skills or tech, characters don't remember any commands between battles (unlike in PSII where they remembered some commands), can't edit an existing macro (only delete or create new ones), magic defense stat is hidden (affected by mental stat + equipment + barrier spell), can't buy back what you've sold to a store unless it already had the item in stock)
Lack of puzzles/action sequences in dungeons (see FF5 and Lufia II)
​Same town music for many towns in the game (though it is good)
Overworld graphics are noticeably worse than battle and cutscene graphics
Most characters aren't very developed and they stay in your party for short periods of time - lose Alys's equipment when she dies (same when other characters leave the group, which can be right after a tough boss fight)
​Some scenes seem rushed or poorly translated in terms of dialogue (seed blows up scene ("sob.. okay, let's go!"), lashiec scene ("oh joy!" /.../ "okay, let's get moving!")
Offensive status spells arent very useful most of the time and/or are limited to a certain character so you don't get to use them much Raja is overpowered in the late game
Last four sidequests happen too late to be challenging
Final boss is a pushover
No poison techs for your party (enemies have it)
Some plot oddities (no one has come back alive from the cave north of Aiedo (what about before the monsters came?), death of Seed scene - very rushed, Gryz in warehouse - i want to revenge my village and family! Hahn: whatever, let's go!)
Other Plot oddities (if villages like Torinco sell telepipes and some NPCs there have made rafts before then they should've been able to teleport to the mainland, can't take the kids at birth valley with you near the beginning, can't ask anyone about the castle near Mile, how'd other hunters get to Monsen?, you didn't really need to rescue Kyra and go to Esper mansion for the big reveal since Rune should've known about the holy fire and told everyone after you first encountered the regenerating trees outside of Garuberk Tower (even if he didn't know about other things (except for being the reincarnation of Lutz) and Lutz' memory was transferred when entering the telepathy ball room, he knew that he was supposed to go there before so he could've probably prevented Raja's illness by telling the party about it), characters talking about magic as if it wasn't the same thing as techniques?)
Chaz is pretty dumb even for a teenager ("I wandered off and now I'm lost!", "Wow! A mirror!")
Cast spells on allies are wasted if the target dies during the casting
Never uses more than around 60% of the system's colour capabilites, Some annoying sfx
Somewhat random battle order (also depends on agility) and somewhat random escape success rate in battles
Some trial & error (unequipping mechanics, combo attacks (order and timing), targeting a specific character with a macro'ed spell/skill - hits the party leader/the one in the middle in battle), several of the Skills/Techs/Items/Weapons have identical effects
Can't equip different gear in battle (less dynamic, more trial & error/planning w/ guides gameplay)
Sometimes hard to tell where the border of a town area is
One monster was taken out of the western release (Akasha/Shadow Mirage, possibly because of the nudity) as well as four minor lines of text