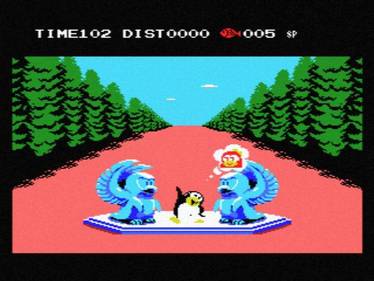 
+ Acceleration control (can almost stop completely, can speed up and slow down in mid-air), decent variation, Space Harrier with platforming-style gameplay, pretty large and detailed sprites overall, good visual variation, puzzle style boss fights, level map screen (non-interactive - see Ghosts 'n Goblins etc.), hidden bonus levels/warps/shops (buy items with the fish you collect) - drop into the slightly smaller holes, cloud power up (fly for 15 seconds) - need to grab a blue heart, temporary invincibility power up (yellow heart, also lets you break certain obstacles), pretty good length (~45-60 min if you play well), speed/HP (rare)/jump height upgrade items, bell item rings when near a warp, cute animations when beating a level (similar to Kirby), respawn on the spot, two endings (however the way to get a good ending is pure trial & error and unrelated to what the king says - need to pause the game a certain number of times during your playthrough)

+/- Timed levels (green heart adds time), Santa Claus cameo (gives a free item - best to pick the map since you'll need it in levels he appears in), slot machine mini-game in shops (win fish), need an item to change direction in mid-air, several items have very situational uses, shots move straight ahead instead of along the road and don't reach very far, you can still die if hit while on the cloud, can't move off the path or get stuck on the wall in a cave level, keep all items after dying,

- No continues without using a cheat code (you're supposed to type NORIKO at the level select screen but it doesn't seem to work (BlueMSX)), kinda choppy sprite scaling (pretty frustrating vs. bosses and when trying to detect shop holes even at medium speeds), trial & error (the fireballs - kinda hard to distinguish from some backgrounds too, bat projectiles still hit if you jump to the side with your avatar moving past their sprite, hearts never change color unless you jump), some control issues (so-so jump height control - none until you get the height upgrade), in some levels you can basically hog the left or right side and still get a bunch of fish, some earlier levels are pretty bland (no enemies or obstacles that can kill you in the first two, level 4 has no shops or enemies), repeats the same boss over and over, no in-game item explanations?, the game doesn't cycle through other shops or remove the holes if you've bought everything from one kind of shop (leads to encounter a bunch of empty shops), floating items sometimes appear right before a boss (during which period you can't jump),