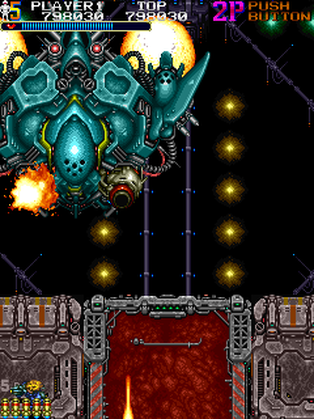 +
2-player co-op, vertical scrolling top down run 'n gun gameplay, fast paced, many large and detailed sprites, upgradeable weapons (three levels - pretty strong at full power but not Fire Shark strong) and energy bar, the sci-fi morning star weapon (super ball - spins around the avatar as long as you hold the button), strafing via two of the weapons (it locks your aiming to upwards like in Jackal - a bit stronger than the free shot but also slows you down a little and has a much slower auto-fire for no reason), pretty forgiving checkpoint system (annoying how there are checkpoints right before bosses though since you can't fully upgrade again before facing them (usually you'll get 1-2 power ups before the boss)), difficulty options (4 levels, coin worth (up to 6 but only for player 2? can't be increased for player 1), lives per credit (up to 5), point intervals for extra lives (down to each 300k)), temporary shield power up (+1 HP), connected levels (manually walk into the next level after the level results screeen), decent intro cutscene (skippable), smart bombs (can hold up to 10), auto-fire, you can trigger Zero wing & Truxton & Flying Shark cameos by playing well (the ZW ship moves across the screen and can be shoot for points, Truxton ship works like a gun drone+shield, the FS cameo is a squadron of planes that work like gun drones except they can be destroyed), makes good use of the environments for its level designs (bridges, twisting corridors, moving platforms, third boss, moving walls that you can take cover behind), very good enemy variation, optional escort mission of the company mascot hidden in the first level (for 40k points), partially destructible environment, good bosses overall (pretty easy level 6 boss), some bosses have several destructible parts, some hidden items,

+/-
No respawning on the spot, fuel mechanic (need to collect energy tanks to stay alive similar to Wonder Boy; probably there to keep you from playing too safely), die in one hit, no run or dodge moves, speed upgrades (no manual speed control), can't move backwards in a level, very short smart bomb animation and it doesn't protect against moving into for example the fourth boss or against the third boss's laser attack, somewhat odd power up conveyance (the first two weapons are a flashing C, the rest are color coded "SP" marked power ups - yellow=flamer, pink=spinning ball, green/cyan=energy extender, blue=speed, white=shield), shorter intro and ending in the non-JP versions, you can occasionally make enemies not shoot back by not letting them fully enter the screen

-
​No weapon inventory (need to stick to the green weapon to be able to strafe, the flamethrower kinda sucks but can at least be avoided easily), trial & error (floor traps in level 7 - can't walk straight across them even at full speed, power up system, some fast attacks, boss patterns), some slowdown (the game abruptly goes in and out of it which isn't good), hard to recover later on (lose all weapon and speed upgrades - could've added a speed power up near each checkpoint, lose all but three smart bombs; combined it makes the last boss a lot harder if you die at it or right before it), can't stand still and aim, no boss music, turns into too much of a cover shooter during parts of level 7 unless you saved up on smart bombs, no sampled percussion (the FM (YM3812) is roughly the same quality as in Zero Wing - not top tier but with memorable and catchy tracks), no ending cutscene in non-JP versions unless you beat the second loop (much harder),


Comment:
I didn't know about it until recently since it's an arcade exclusive, but it's one of Toaplan's best up to this point I think. I especially liked how they weaved the environment into the gameplay in cool new ways, like the third boss that cuts off pieces of ground with a giant laser. Each of the seven levels feels pretty unique, the action is usually fast and intense thanks in part to good smart bomb placement and the fuel mechanic (which works like in Wonder Boy), and all but one weapon are very useful. There's no weapon inventory, but you can at least avoid the worst one, the flamethrower, pretty easily. I generally stuck with the green and pink weapons, since they let you strafe. Another thing that's pretty cool is that they put cameos from three earlier games in this one, triggered based on your score I think, and a hidden escort mission featuring their mascot in the first level, with a bunch of points as a reward.

The game looks great for 1990, with careful attention to detail given to pretty much every tile. Most bosses are huge, and some have several destructible parts. As for the music, pretty much all the songs are on par with the great Hellfire and Zero Wing ost's in terms of composition while the FM synth work is solid but not quite top tier for the YM3812 chip. You'd probably think it was made at the same time as those other two just from listening to it. This was a couple of years before they started using samples in the music, and their synth drums aren't the best.

I can see why it wasn't ported at the time; top down/vertical scrolling run 'n guns weren't as popular as sidescrolling ones at that point and there's plenty of slowdown in some segments, of the kind where the game abruptly goes back and forth between slow and normal. The PS1 or Saturn could've handled it well, but I think they were bankrupt by that point.

I also was never a big fan of this kind of design where you get huge difficulty spikes for dying once later in the game. They do give you a power up or two near the checkpoints and starting with 3 bombs isn't bad (however if you had saved up to the maximum of 10, you lose 7 bombs - ouch!), but what you really need is speed, an annoyingly rare power up, and there are checkpoints right before bosses too. Perhaps playing it in 2-player helps here, though I suspect it would cause more slowdown as well. I should also mention that the game loops, and there's no ending cutscene at all in non-JP versions from what I've gathered. The second loop is frustratingly hard already in the first level (the changes in the second loop seem separate from the difficulty level that you pick in the options, with enemies shooting sooner and faster than before), so I'm content with having beaten the first.
​