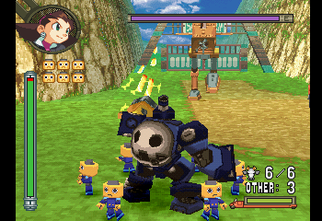 
+
Play as the two pirate leaders from MML1
Tactical and Action Adventure/ARPG elements (gain two new tools which let you explore further into two areas by letting you break through certain walls, can send servbots to scout ahead between missions (up to 3 and later on 4 - Brains is important here as well as for item appraisal and in puzzle missions), can develop new items and weapons+upgrades for the Gustaff robot (defense, energy, e-tanks; these are attached automatically) at your base - costs money but is instantly finished, can talk to each of the 40 servbots at the base for tips and general comments, each servbot has 3 stats which can be upgraded and each one has different max stats as well as a special skill (Pokémon-like; if a bot doesn't have one from the get go its special skill is unlocked by raising stats or giving it a certain item), you're accompanied by six CPU allies (servbots) of your choosing during missions and can manually order them to check buildings and caves for goodies or to distract/attack an enemy for a bit (the latter tends to temporarily knock them out, hold R2 to aim and then shoot out a beacon that they'll follow) - they can't be killed, short briefings before missions)
Pretty nice cutscenes (great camera work and pretty good animation, skippable (can also speed up dialogue on a per paragraph/sentence basis during most cutscenes (cancels the VA for that line) - dialogue here is sometimes on a short timer however so you then have to read fast)),
Can pick up and throw boulders as well as smaller enemy vehicles (including police cars)
Great art direction overall (some cel shading or a proto-version of it on character faces?, animated dialogue portraits and sometimes full models), some large and detailed models
Can appraise and sell items in the Storage room of your base, can change the color of the Gustaff robot/mech in the Meeting room, can replay mission 4 (ruins treasure hunt, enemies respawn in-between visits but not while in it) - can retreat from anywhere in a mission area but you won't keep the items collected (have to manually retreat to the ship in mission 4 except for the run in which you beat its boss), can sort servbots by stats/number/location (however you have to redo the action after going out of the list menu and back), same auto-fire as in MML (shoots in short bursts which can be upgraded to be longer), some good block puzzles (TD view docks missions, tile-based movement but can also jump on top of boxes, limited moves per round (3 per mission) in these), three different robots (Gustaff - mech, Finkel - flying search robot for digging (FP view, can't shoot (only perform a basic melee attack which also opens barrels) but can draw attention to itself with a sound), Gustaff Tank for carrying cargo (can't attack)) - can't choose which to use for any mission, some good bosses (final boss unless fully upgraded (two phases, move around on top of it in the first one), have to lure the first one in the digging missions into traps and for the second you have to take out the leader of a squad of smaller robots to take out the otherwise invincible squad, ), the Gustaff robot's ranged weapons' effectiveness is upgradeable and tied to which servbot is chosen as "sniper" for a mission here (attack=attack power, speed=rate of fire, brains=tracking ability for the search cannon/# of shots fired per burst for the gatling cannon/max range for the bazooka, can't upgrade # of shots and range for all three weapons; can pick a sniper as your favorite bot to increase its stats), pretty good variety overall (rob town buildings while fighting off the police, explore for treasure, escort bots as they kidnap farm animals and then protect the truck in the farm mission, block puzzle levels - second variant lets you order a bot with a forklift around, a few mini-games; the variation between missions is better than between levels within missions though), some destructible buildings and other objects during robbery missions, most NPC dialogue updates now and then throughout the game and there's generally something new happening between every third mission or so, nameable servbots, some decent voice acting (mostly average and occasionally so-so), good map system for the puzzle missions, optional vibration, some hidden items (fewer than in MML though), skippable staff roll and ending

+/-
Partially non-linear mission-based structure (choose between 4 at a time on a map screen after the intro level (6 after gathering 1 million zenny/gold) - each mission is actually a pack of 3 different levels besides mission 4 which instead can be repeated over and over but stays the same, your home base is a hub menu rather than an in-game area here - you'll unlock 5 more rooms for it over the course of the game based on amount of missions cleared and if you have 1 million gold or not, can go to the final level/rescue mission without having beaten all of the missions (I had two mission levels left to do when I unlocked it))
The mini-games to increase servbots' attack stat and speed stat are decent at first but getting the highest level (4) for a bot is very hard - luckily you can also use the Cube items which can be found by scouting (in mission 4/Nakkai Ruins you can also find 1 Attack Cube and 3 Brain Cubes) and for speed training you can actually pause in-between orders to give yourself a breather
Still can't move while locking onto an enemy (can't do it if you picked auto-aiming before beginning either; TR1-2/OoT/Soul Reaver) - lock-on works well except vs fast flying enemies where it would've needed to aim ahead of the target
Save at your base between missions (five slots (shows number of missions cleared and time spent)
Early missions are very short overall
Can't choose which vehicle to use for a mission, sloth stat for bots (represents how lazy they are and increases for bots who don't go on a mission for too long - a lvl 4 sloth stat means the bot won't go on any more missons, to return the stat from 4 to 1 you'll have to torture the bot which is done via a short trapping mini-game - the margin for error is pretty small here but you can retry over and over, can reduce the stat with Energy Cubes), HP restoration points in the mission 3 ruins, the first HP restorative item isn't worth the money, cutesy/light-hearted tone, somewhat slow transitions between rooms in the base (5-7 seconds), mega man isn't in the game besides as a cameo on a TV screen in mission 1 (game takes place before MML1), can only send 3 bots to a digging mission/mission 3, mini-maps only for the ruins missions (shows the layout of an area (don't have to fill it in here)+doors and your location but not chests or cracked walls and you can't tell if you've been down a path or not in missions 3-4, very zoomed in besides in the block puzzle missions, can't put markers on the map; no mini-map during robbery missions or farm missions but their level design is straightforward with several invisible walls) - can find full maps online, some servbot special skills are useless for progression but add some personality and minor bonus content to the game (some don't have a special skill), no melee kick attack and no sub weapons/special weapons for the Gustaff robot here - you only have three main ones to choose from here but they can at least be upgraded via the sniper bot, no charge shot and no wall jump (MM/MMX), unlockable casino mini-game (pick a fav bot and then rest in Tron's room) - luck-based, the attack stat on your sniper bot makes a huge difference (a lvl 1 attack bazooka is weaker than the first weapon with the default sniper when starting the game), the servbots look like lego figures, can only train 8 bots' attack and speed stats at first - unlock the rest after Teisel's room is built/beating one of mission 5-6, frequently respawning enemies during some levels and boss fights, can stand on some interactive objects to avoid melee attacks, can't play as Bon Bonne or Teisel after they're rescued, seems you can't shoot faster manually by taking a step forward between shots here (MML1), some alternate ruins and/or robbery locations or a hard mode would've been good (some could be harder but still available fairly early thus offering a risk/reward mechanic in more places besides mission 4), no towns here but there's a decent amount of NPCs to interact with in mission 3 and of course the servbots in your base, you never get to control the airship/home base directly (could've been interesting for the finale), no in-game epilogue here, enemies don't drop HP (money for e-tanks is only a minor issue early on though and you can carry several of each type), the game outright explains how to beat some bosses instead of giving you clues while not explaining some others at all, 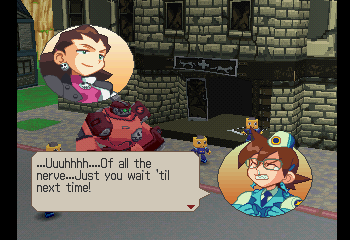 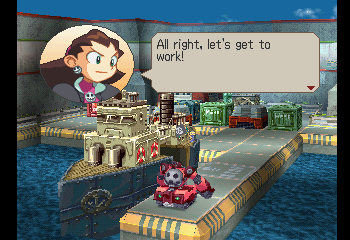 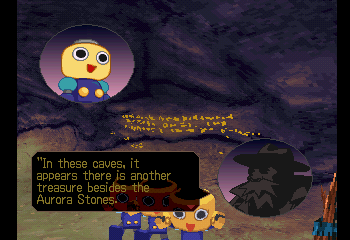 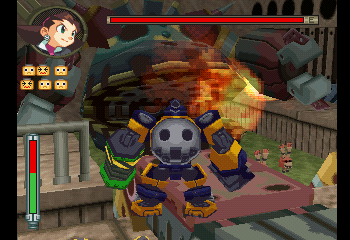 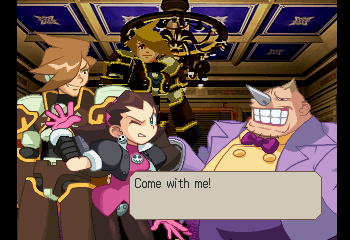 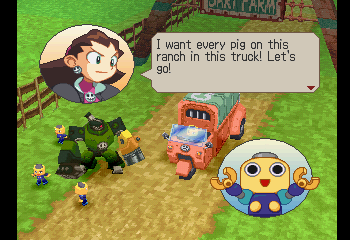 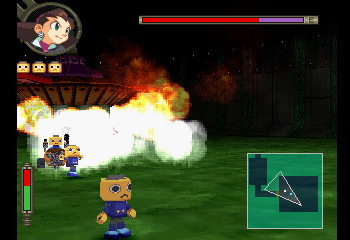 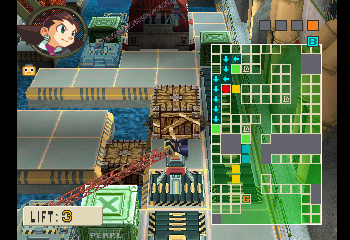 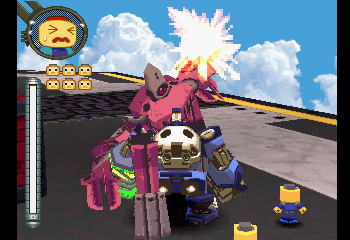