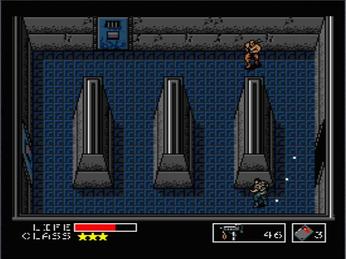 
+ Stealth mechanics, weapon and equipment inventories, manual radio dial for communicating with NPCs, exploration-based gameplay, binoculars (found early on) let you view all adjacent screens in the cardinal directions (some delay though and it's weird how you can see through keycard doors without Snake being able to walk up to them), checkpoints at the beginning of each area/when exiting or entering a building, basic level up/rank system (increases inventory sizes and ammo supply), other interesting gear (the enemy can place a tracker in your inventory if you get captured (can be thrown away), enemy uniform, infrared goggles, silencer, plastic bomb, manually guided missiles, etc.), "Diane went shopping", boss introductions, pretty good at creating a sense of vulnerability at times (the dogs, losing your gear before the first boss), get tips from NPCs via the transciever (they won't always reply though and there seems to be a bug with Schneider where he says he'll guide you through the fortress but then doesn't reply to calls?), some interesting level design (flying enemy triggering an electric floor trap, moving infrared beam alarm room, tank fire in the desert), good length for its time, escape sequence, you get better rewards from enemies by punching them to death (odd but works from a gameplay standpoint; they didn't drop anything on NES), using the binoculars doesn't respawn enemies here, better interface than on NES, save feature (loading puts you in the previous elevator room though),

+/- Early on the enemy quickly forgets about you if you run off the current screen (except for the dogs) - on NES they were dumber throughout?, no scrolling, easy to farm certain items (rations, plastic bombs) in a truck near the beginning, can't smoke at will, the enemies are pretty bad shots, can't simply knock out enemy soldiers?, four way movement and attacks (expected for the time though it's a bit annoying that enemies can shoot diagonally when you can't), start out without a weapon, can't cling to walls or duck behind cover (see Crack Down and Cabal), limited ammo, touching enemies hurts Snake, enemies tend to respawn as soon as you exit the screen they spawned on, rations can be used in the inventory menu (while the game is paused), can't see how many captives are left on the current floor, cardboard box lets you become invsibile to the enemy anywhere (a bit overpowered though you do take damage if touched), can only call an NPC from certain screens, grenade launcher works and looks more like a thrown grenade in-game, minor slowdown, can't grab weapons from enemies, need to save enough captives to reach rank 4 (to be able to talk to Jennifer and get one of the best weapons) - not stressed enough by the game,

- Repeats radio messages if you return to the screens where you got them, can't speed up text on a per paragraph/text box basis (you'll skip the message instead), no button config, trial & error (the pitfall traps, bulldozer tank screen - very small margin for error, would've been less cheap if Diane called Snake as you were facing the tank instead of having to guess when you were supposed to call her or what to use on the tank - you also need to stock up on extra mines for the fight, no warning about the mines or the truck that moves back to the beginning when you get on it (there's another one of them though the punishment isn't as severe the second time), for some reason the box doesn't fool flying soldiers, can't punch the dogs?, getting to the isolated cell by being caught (need to move to a specific dead end and it doesn't always trigger (you either needed to have the info from the captive first or it's a bug)), finding bombable walls (no visual clue), enemies popping out of trucks, sometimes cheap enemy or camera placement (after the first gas room, narrow path on floor 1 of building 1), can't tell if a door is currently unlockable despite looking the same as one that is (and there's no confirmation from the game/Snake that you can't open it yet)), no map feature (could've been Link's Awakening style), sloppy hit detection on mine blasts (they reach much further than it looks like) and when your sprite overlaps with enemy sprites, can move and shoot but not move and punch, having to switch keycards quickly gets old, no dodge or strafe moves (the first boss can strafe), no animation or even blinking when damaging an enemy, need to re-open unlocked doors right after unlocking them and moving to the next screen, slow elevators, soldiers can only see pretty much straight ahead (so you can generally walk right past them as they're moving forward), somewhat slow movement and you can't run, the robot soldiers forget that they've seen you if you just run away a bit on the same screen, gets a bit repetitive about halfway through (in terms of enemies and the soundtrack), so-so bosses overall (pretty simple patterns and it's often impossible not to get hit, some of them look cool though),