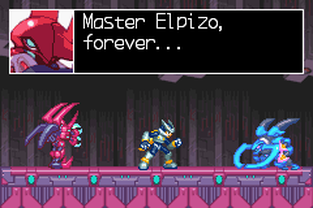 *w/ elves, elements and upgraded gear (vs sub tanks only)

+ Somewhat better intro stage (more variation, a bit tougher and more spectacular), the rod was upgraded to the chain rod (pull objects/enemies/power ups towards you, hang or swing on the ceiling like Spider-Man), fewer but longer and more varied missions with mini-bosses and checkpoints (the whole game is somewhat longer than the previous one), some creative level design (pulling blocks around to get to new places, more interesting boss arenas - transforming snake platform, train chase, etc., bounce exploding enemies into destructible walls to open new paths, the crystal cave, the double boss fight (beetle bros.)), hidden items, six save slots, somewhat more interesting resistance base, the game now tells you the name of the cyber elf you've picked up right away, new golem types, mission select now shows boss names and portraits again, new suits/forms for Zero (changes stats somewhat; thse have hidden requirements like jump slashing 20 enemies in a stage which can get tedious since you have to do them while in a mission and you can only get one form per mission), some nice effects (the phoenix boss), some alternate paths through stages, you can get around the ranking issue by using an elf that puts you at rank A (so you can explore at your own pace and still get the toughest boss fights and the EX skills; can be used 5 times), some environmental effects (burn down bushes, freeze molten iron-filled buckets), unlockable hard mode (no weapon upgrades, enemy hits harder), bosses mock you if you lose against them, some EX skills are improved by also equipping the right elemental chip (trial & error)

+/- Proper e-tanks/sub tanks return (two of them and they don't affect rank; you can still get two more via the elves), more guitar/rock-oriented sountrack, can't move while attacking with the chain rod and there's some delay waiting for its chain to retract, gain new moves (EX skills) from bosses by achieving a high enough rank in their missions (A or S - a bit counter intuitive since a bad player is more likely to need them) - making them use those skills during the fight, choose between four stages/bosses at a time (proper difficuly scaling or giving the option to access all of them but telling the player that the later four are harder would've been better), can't push boxes and such, you get the double vitality elf later here (?), life refills before each mission, no ammo, can't ask NPCs about what you want, can't shoot through walls (but you can sometimes melee attack through them), somewhat easier to get S ranks than before (but getting an A is still much harder than a B (especially if your average rank was low before getting a good score in a mission - I've gotten a B at 95 points), getting a high rank means you have to rush through stages as well as know the patterns (this clashes with exploring for elves and tanks), re-uses some bosses from the prequel (blue, red and green guardians - new patterns, the blob/rainbow devil - easier even on A rank), off screen enemy respawning (really annoying in some parts like neo arcadia), it's the rank you have when entering a stage that determines whether or not you'll get an EX skill in that mission (weird but you still need to play well to keep the rank for the next mission), more voices from bosses?, sword combos tend to override bosses invincibility time after taking hits (can't keep going after the last swing in a combo though), short pause whenever you pick up health (gives the game a classic MM feel but it can be distracting)

- The game world is split into stages (you can still revisit them though), can't fail missions and still continue the game this time, slower teleporting and saving, makes no sense that you don't start out with powered up weapons (they even gave you the MMZ1 menus in the intro stage so why not?) and you should've been able to buy weapon upgrades for crystals so you don't have to grind to make the alternate weapons on par with the sword (at least you get all of them right after the intro stage in this one), some spelling and grammar mistakes, trial & error (can't have the Sengatotsu EX skill equipped if you're trying to get the Active form by dash slashing enemies, you can slide through the purple meat eating plant-like robots when they're stretched out, spikes kill from the side (usually obvious from the sprites but not always), beetle brothers' post death attack, can't destroy the smaller snowballs thrown by enemies with the sword, can't see how long you have left to level up a weapon, shots from off screen, leaps of faith into spikes/pits/enemies, spiked ceiling in the forest stage, mission briefings don't give you a hint about how difficult a mission will be, boss patterns, etc.), unforgiving hit detection on the green crouching soldiers when using the chain rod, hard to get used to the ice physics (need to be at the peak of your dashing speed for the dash to affect your momentum at all and there are many spikes in that stage), still need to grind to be able to raise more than a few cyber elves (the game tries to create more interesting challenges to get to large crystal containers but they don't give you enough crystals, level requirements are also lower but it's not quite enough), still don't get to fight alongside the resistance army (even though there's an all out assault mission with a bunch of your allies troops lying around in the background), no rewards from most mini-bosses, uneven difficulty (spikes: A rank phoenix, the timed electric wall traps in the aircraft mission, the snowball & mines section in leviathan's stage, harpuia's A rank form, the falling platforms & fiery buckets section in the factory) and dips: the holdout segment in the same mission, the 'protect the supplies' segment on the train (which is only a bit tough right when it starts; both go on for a bit too long and don't get more intense towards the end), harpuia's and fefnir's mech forms, pretty easy final boss form), can't dash jump off of ladders, can't keep dash jumping on the ground by holding down the button (like in MMX4), still need to raise the big elves to their final levels before you can get any effect from them, you'll still get health drops when at full health (would've sped up crystal collecting considerably to only get crystals at that point), can't quickly retry a stage after getting a bad ranking, can't review previous rankings, also can't retry from the beginning after restarting from a checkpoint, need to pause to change elements and weapons (one of them could've been mapped to Select), can't charge your weapons during boss intros?, the difficulty curve doesn't scale according to what upgrades you currently have, can't speed up or change the position of "level up" messages (can get in the way of gameplay at times), somewhat scratchy sound, sometimes need to wait for an enemy to drop its loot after death, minor slowdown, rehashes a bunch of stuff from the prequel, can't skip most in-game cutscenes/dialogue, the game doesn't show your average rank (which affects your current rank; for example if you had a few C's and then got the score for an A you'd probably only raise your rank to B)