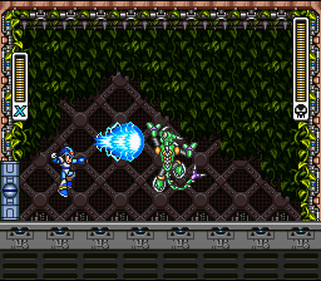 ​
+ Secret items (upgrades for X and energy tanks), choose the level order (replay beaten levels for items), boss affinities (most bosses are easy with the right weapon), new moves and weapons (block crushing helmet, dash boots), good variation, great bosses overall (multiple patterns, very little slowdown), beating one stage affects the environment of another (this can lead to the game becoming easier though), switch special weapon by the press of a button, charged up special weapons, teleport out of beaten levels (?), ride a mecha

+/- Spikes kill instantly, can't dash jump off ladders, respawning enemies (as soon as you scroll the screen out of view of their spawning points), roughly the same number of enemy types as in MM3 (~42, they’re generally larger and better animated though),

- Mostly a rehash of old ideas, a bit slower/less frantic than the NES games (but still fast, especially in boss fights), some trial & error (bosses), storm eagle is pathetic (so is spark mandrill with the ice beam equipped), you have to find the dash boots to dash (meaning you'll always want to start with chill penguin’s stage - less freedom), some items are pretty tedious to get (especially if you don't get them in the correct order), somewhat weak sound effects (too much low quality reverb), you'll get tired of mashing the dash button to do running jumps, some tedious vertical platforming, reuses the annoying "robot with shield" enemy in several stages (breaks flow), still can't duck (breaks flow until you know the levels inside out), some slowdown, somewhat tedious final boss (final form), it’s tedious having to wall jump up to and speak with Sigma every time you retry the fight with him, boring intro level (very short though but it is mandatory), 'more is more' design approach


Comment:
A solid action game, one of the best for the SNES, but after all the hype it receives I was a bit disappointed. I don't think it innovates the formula enough and the sequel had a better flow to its levels (it also had the courtesy of giving you the dash right away instead of making you always begin with a specific stage). The build up to the finale is the best of the trilogy, as is the music, but the finale itself is just tedious. Finally (hurr hurr), I much prefer the more minimalistic visual style of the NES series to this somewhat bloated, more is more approach, but this is a minor gripe.