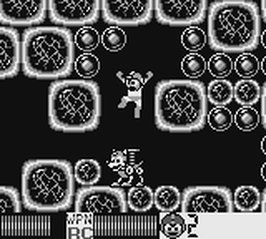 +/- Mixes MM3 and MM4 levels and mechanics, only four stages available from the start (gemini, snake, spark, shadow; then a mid stage and after that four more are unlocked: dust, drill, skull, dive), a buster charge is kept until a slide is finished even if you release the button, easier to reach the light bulbs in shadow man’s stage, harder MM4 stages overall, slightly harder dustman (still easily falls into his boring vacuum pattern though), 1-up and e-tank limits (9 and 4 respectively), fairly long knockback, can’t shoot while sliding, no delay when starting to move (just a tiny little bit when turning around)