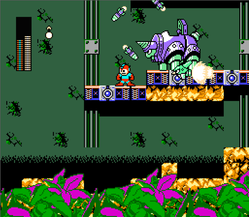 +
Great variation
good bosses overall
hidden items
mixes platforming with shooter and snowboard stages
some innovative level design (Clown Man and Grenade Man stages)
switch between special weapons on the fly, nice cutscenes considering the limitations, replay beaten levels (except for the robot master encounters), some alternate paths, bounce on the mega ball to reach higher (you can keep bouncing for as long as the ammo lasts, not explained by the game though and it’s almost redundant after you get the tornado weapon), controller support (wasn’t there in RM 7 FC) and mapping options
Compared to SAT/PS1: Faster movement and sliding, keeps the shop but it’s been changed quite a bit and looks like in MM9 (only keeps faster charging, 5 bullets on screen, stronger health power ups, knockback remover, exit, 1-up, energy balancer and energy saver; adds e-tanks; most items are cheaper but only last until the end of the stage you use them in), removes some of the crappier special items, faster boss intros and screen transitions, no slowdown?,

+/-
No voice acting
no wall jumps
buy items in a shop (mostly for convenience and making the game easier)
mega ball weapon (situational)
only four robot master stages available at first (better difficulty scaling but less freedom)
getting to bolts is often a matter of having the right weapon/item instead of skill, the bosses are generally harder than their levels (except for frost man here), off screen enemy respawning, can't shoot while sliding, forgiving hit detection overall (especially near platform edges, you can only hold 9 lives (additional collected lives are wasted), dialogue scenes can be sped up but not skipped entirely
Compared to SAT/PS1: Choose between all eight robot master stages from the start (they’ve been tweaked so that you can beat either one without the upgrades needed on PS1/SAT and the first four stages are harder here), harder to use the mega ball to bounce in mid-air, less cutesy art design, normal knockback, fewer 1-up drops (?) and a bit more HP drops from enemies, start with the mega ball in your inventory, unlimited bolts (can buy everything, no planning needed unless you’re speedrunning or beating some challenge), no more slight movement delay after sliding, continuing no longer spawns you at the beginning of the second half of a stage (right after the mini-boss) – instead it’s back to the beginning, sprite-based adaption of the pre-rendered get weapon and wily fortress graphics (looks OK), no more ammo refills after losing a life, mega buster charging now restarts if you take a hit, less invincibility time for the astro crush

-
Trial & error (snowboard parts, bubble and windy segments on Tengu man’s level, maze in Clown Man’s level, exploding platforms (the bombs lit by enemies) in Grenade Man’s level, RJ segment in Wily's fortress)
some unnecessary points of no return
rehashed ideas and enemies
many music tracks are too ambient/laid back for a mega man game
mazes in a mega man game? (clown man (short though) and astro man (longer))
​sometimes poor special item explanations, no difficulty options, no mid-boss/mini-boss health bars (makes it harder to tell if a special weapon is effective), can't sell special items/parts, riding the snowboard is tedious in some parts until you learn them (because you end up too close to the edge of the screen to react, the control isn't perfectly responsive on some of the platforms and you can’t slow down), tedious green devil battle (slow 'forming' animation and long invincibility times), somewhat easier Bass battle, repeats the boss intros for the boss rush (they’re shorter here though), the grenade man ‘puzzle’ where you need the flame sword would’ve been more interesting if you instead had to lure an enemy from the right to get to the bolt, no usage demonstration during the ‘’get weapon’’ cutscenes
Compared to SAT/PS1: no save feature and the passwords are much longer than in RM7 FC, more limited controls - you can’t shoot normally while having a special weapon equipped, no intro or mid-game stage, MM7/9-style bolt system (money won’t be an issue after a while) and much fewer large bolts to get to in the levels (sometimes a large ammo or hp power up replaces them, sometimes nothing!), no Rush except for RJ, no bonus mode, ammo drops will once again be collected (wasted) if in normal form and without the energy balancer, no life refills or other rewards after mini-bosses (except for the one in tengu man’s stage), doesn’t fix the charge shot control during pre-boss cutscenes (if you let go of the button you have to start charging again when the battle begins), no swimming, no cut man or wood man cameos, no alternate main weapons (laser and arrow shot – could be turned off), some annoying sfx


Stage by stage comparison:
Grenade Man:
+ Somewhat harder platforming overall
+/- Harder boss (without the right weapon) - stays in the air a lot more and moves faster, harder to get the reward at the end of the platforming segment with the fire enemies blowing up the platforms) and it’s replaced by an e-tank, NES/SAT hybrid style sniper joe
- MM9-like pit enemies (faster, respawning) and they’re placed inconsistently throughout the platforming segments (tricks you into thinking there won’t be one in the next pit and makes you play more carefully in other stages where there are none), unintuitive platforms at the green scaffolding (looks like a pit), dumbed dumbed down destructible block puzzle around the middle and there’s no bolt reward for taking the middle path (just HP), the boss doesn’t break the floor like on SAT/PS1?

Frost Man:
+ Faster and more aggressive boss (he isn’t stunned by the flash bomb)
- Harder snowboard segment (the giant flying enemies are more aggressive and near impossible to kill (without the right weapon?), occasionally the controls don’t register a slide or jump, still can’t slow down – speed is about twice that of when you’re sliding normally, the wall obstacles that you could just go through on SAT need to be shot here, hard to see the penguins against the black background, cheap rabbit placements), shorter stage (lacks the ice cube maker puzzles),

Tengu Man:
+ Easier controls in the windy segments, somewhat harder bubble segments (just right), harder boss (harder to dodge the dive and to hit him in mid-air, tornado now does damage (the only bad thing is that it’s too similar to the other wind attack), faster attacks and movement, new stomp attack),
+/- Somewhat easier shooter segment overall (less cluttered, smaller player sprites) though it’s harder to grab falling power ups, more annoying helmet enemies in the room right before the shooter segment (you’re supposed to run past the enemies here which isn’t obvious at first),
- The shielded flying enemies seem a bit more tedious here (faster, shorter path), nothing in the lower path near the end (where there used to be a large bolt)

Clown Man:
+/- Somewhat harder boss (harder to tell what he’s going to do and he moves faster, a bit easier to dodge the swinging though and there are no electrical traps on the walls)
- Trains kill instantly if they run into you (low damage when touched from behind though and you don’t need to stand on their heads anymore – anywhere on their upside is fine), dumbed down train segment (they don’t run into each other), the stage takes a pretty big hit visually, more annoying bell sfx than on SAT/PS1

Aqua Man:
+ Harder and better boss fight (stomp move, can shatter the wall of water, better volley burst move, faster movement)
- Easier and less intense mini-boss, no swimming (works like in the NES games instead), keeps the leaps of faith near the end (e-tank, 1-up, spikes)

Search Man:
+/- Easier lightning whip swinging, the boss moves faster and has one new attack but dies faster to the flame sword than on SAT/PS1
- Leap of faith into an enemy before you get in-doors, much shorter than on SAT/PS1, no ‘closing door’ gimmick, minor slowdown,

Wily 2:
+ Somewhat harder RJ sequence
+/- Only one RJ sequence?
- No refills or shop access between Wily stages, keeps the cheap part in the RJ sequence where you can easily get crushed if you don’t know what’s going to happen

Wily 3:
+ Somewhat harder Bass fight
- Another broken checkpoint (restart the stage instead of spawning before Bass), tedious and cheap green devil (some unavoidable hits when it spawns right where you’re standing, varied pattern to learn, long invincibility times, very little damage done per hit if you don’t have the right weapons)

Wily 4:
- No power ups before or after the boss rush, harder Wily (both forms, need the right weapons or e-tanks)