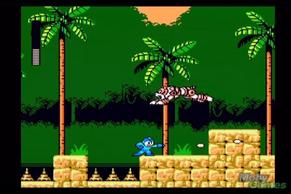 
+
Good variation
good bosses overall (not counting stone man, napalm man or star man; most of them go down quickly using the right weapon though)
item collecting done right (no tedious sidetracking)
the water scooter segment (only bad thing about it is that you can’t access the pause menu while it lasts)
M tanks (ammo + energy)
some innovative gameplay (gravity man), no more dropping from ladders after pausing, some of the best art direction in the NES series, nice cutscenes

-
Some trial & error (leaps of faith! - crystal man and one falling segment in the fortress, can’t jump downwards at the top of a vertical segment in gyro man’s stage since the area below turns into a pit)
few mini-bosses
rehashed weapons and themes
mostly easy levels and enemies early on (but enemies can do a lot of damage and usually take more hits to kill than normal - forcing you to play slower)
you can fly past many segments using what looks like an ear picker (this game’s rush jet)
​altered rush coil that is less intuitive and has poor hit detection, no hidden items (there are some items inside walls but they are visible to the player), no difficulty options, unbalanced weapons (some useless, some overpowered), some sloppy hit detection (bigger sprites, spikes?), charge man's level as well as the first half of stone man’s level are pretty boring and grav man’s level is much easier than the boss himself, lose your charge beam when hit (didn't happen in MM4), you’ll sometimes get stuff like E-Tanks from friendly robots without having done anything special, some slowdown, difficulty spike at crystal man’s stage