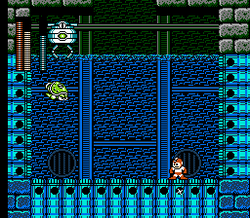 ​+
Better bosses overall (more challenging because of the added invincibility time after hitting them and harder patterns)
introduced rush the dog (coil, submarine and jet flight - replaces the items from MM2) and sliding
great art direction
password save
grinding isn't as rewarding
floaty controls are fixed (but the delay is still there), slightly less knockback, more large mini-bosses (gemini-, snake-, top- and needle man revisited, start out with rush coil, faster energy refill from power ups, e-tanks are kept after using a continue

-
Some trial & error (you need to save certain weapons for unknown occasions or you are screwed (=have to use a continue to regain ammo)), jumping enemy after a platform/pit segment in shadow man's stage and electric trap in a similar area in spark man's stage, using rush marine on gemini man's stage water segment usually means death (hard to know how to deal with it the first time around))
Rush Marine is pretty much useless since Rush Jet can be used in water
jumping constantly while using Rush Jet makes it not waste any energy
more slowdown (sometimes button inputs won’t register, less flicker though)
a bit less frantic (empty rooms (shadow man, top man or bright man)
​tedious and easy proto man fights, gemini man stage segments with the eggs), pathetic final boss (the giant robot part), Wily's fortress is easier than the remixed stages, you can't replay beaten levels, no intro, some rehashed level design and enemies (disappearing blocks, yellow devil and mega man clone though the last two behave a bit differently), somewhat worse enemy variation than in MM2, refighting MM2 bosses is a lame idea and beating them is usually only a matter of using the right weapon and button mashing, you can't pause if any of your bullets are on screen (only used in an interesting way once in the game), pausing while on a ladder still makes you lose your grip, pausing while in RJ/RM makes it disappear, some sloppy hit detection (bigger sprites, spikes), Rush variations are given in a set order instead of based on how many stages you've cleared, hard knuckle = nerfed crash bomb and shadow blade = nerfed metal blade, spark shock is only useful against a couple of bosses because you can't switch weapons while it is in effect (to take out stunned enemies) and enemies still hurt you if you touch them, no difficulty options, some difficulty spikes (air man, needle man, the long rush jet segment in the second needle man stage – need to beat the segment and the mini-boss after it right away or you’ll end up back at the beginning of the RJ segment without any fuel for it – means you’ll have to restart the stage by killing yourself or farm for ammo (takes a long time in this one))