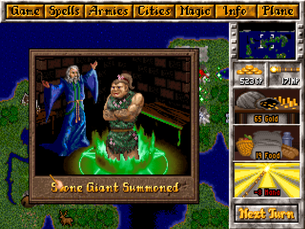 
+ HoMM and Civ 1-like gameplay (build cities, train troops, explore the world map, find treasure and wandering enemies, hire heroes and sometimes neutral units) with a focus on spellcasting (each city is controlled by a wizard that researches and casts various spells), basic governance (tax options (higher taxes plus racial tensions and some other things lead to more of your population becoming rebels who won't produce anything nor pay tax - can be suppressed by garrisoned troops/certain buildings/certain spells), worker distribution (food vs production/training), food and gold upkeep), diplomacy (propose treaty, threaten, offer tribute, exchange spells), armies don't need a hero to move around/fight/grab resources, capture nodes to gain more mana per turn, some interesting spells (spells that have global effects and/or environmental effects such as a summoned volcano), 14 different wizards to choose from (pre-made or customized; portrait, nameable, schools of magic - only life and death can't be combined, class, population race (14 different ones in total, myrran wizards can pick typical from a second category of races of which there are 5, banner design (5 different ones)), tons of different spells, multiple nameable save slots, various scenario options (difficulty - lowest/intro is default though there's a score penalty if you play below normal, land/continent size (small-large), number of opponents, magic power), troops and heroes can level up, hotkeys for the sub screens and various other functions (however the mouse pointer moves to where the button you used a hotkey for is), two parallel worlds/planes, cast spells and use heroes in combat (heroes are kind of weak until much later on though, can't use your wizard in combat), automap (the world map is drawn by the game as you explore), interactive mini-map (Dune 2), terrain effects (various effects on a city's growth, movement), manually establish new cities (terrain affects population and resource growth), auto-battle option (can be turned off after activation, the AI isn't very good though and won't flee if overpowered), basic reputation (fame) system - decreases the total cost for troop maintenance and makes more powerful heroes approach you (increased by hiring legendary heroes, banishing other wizards, capturing towns or winning major battles - lost by losing battles or cities), the game warns you when units are about to starve to death (on the other hand it's a bit annoying how they'll starve in one turn, also if one of your cities is taken then there is no warning (seems the high upkeep or last made troops die first) so you need to keep an eye on upkeep), alchemy (turn gold into mana), artifacts (gear for your heroes), racial tension mechanic (causes unrest/rebels), pretty nice city view graphics, can instantly buy buildings/troops that you've started producing, cutscenes for major events (summon a creature or research a new spell, kill a rival) and animated portraits when talking to rival wizards, different overworld music depending on how well you're doing compared to your rivals (economically), can boost certain spells' power using surplus mana, fairly detailed scoring, two ways to win (casting the spell of mastery or defeating your rivals in battle - perhaps there would've been an alliance option but diplomacy is very glitchy), can dismiss units and heroes, can destroy artifacts to gain more mana

+/- Can map out a unit's movement route ahead of time (later used in HoMM), but the pathing is a bit strange, locations with treasure disappear after taking the treasure, heroes and neutral troops offer their services instead of you seeking them out (in for example a tavern - see HoMM 2-3) so you can't make exact plans for when to hire who/what, can let a cpu controlled governor handle town construction, your units gain experience without doing anything (but they do gain more from combat), can sometimes lose a unit from fleeing though it never seems to happen on default/lowest, can't build bridges (need to cast and maintain walk on water spells instead unless you only use units that can move over water), damaged units regenerate over time (this can also be sped up in cities with certain buildings), units that can move one tile in battle generally can't move and attack in the same turn even thoug they can attack twice when standing still, roaming monsters/neutral troops which can attack your cities, distance penalty and ammo limitations for ranged attack units (can be abused vs the AI), maps loop around horizontally, no city layout options, only dead heroes that were under your command can be brought back and only with a resurrection spell (life book, uncommon) - unless it was killed by a cracks call spell in which case it can't be brought back (Torin also can't be resurrected but instead you can re-cast the incarnation spell), the buy mechanic can be abused by switching and buying different things mid-way to save gold if you have 10 production points, random map generation (while cool it wasn't balanced as well as it could've been), terrain only affects movement in combat (besides walls), higher difficulties affect pop & production growth plus research speed (slows the pace down) and starting gold - intro-easy advantages the player compared to rival wizards while hard-impossible disadvantages them, no map size option,

- No tutorial, slow paced (only some races can build roads, can't train troops and build at the same time in one city, most units can move only a single tile per turn and while there are spells that increase this by one tile they are relatively expensive (there is also a teleport (word of recall) spell you can get but it's sorcery only and should be combined with a summoning circle spell for good efficiency), neutral locations tend to have pretty good defense even on the lowest/default difficulty so you need to build up a decent army to take them on - cities on the other hand tend to be rather poorly defended, newly established cities take quite a while to develop into something useful, ), clunky interface (right-clicking yes/no confirms the choice after attacking a city and winning - means you can accidentally raze or keep a city, no building queue, no hotkey for switching between cities?, can't see the full building and unit tech trees in-game, can't survey map tiles (see info on them) while viewing a different sidebar menu and can't select sub menus without canceling survey mode first - the surveying info could've been put below the map view or in the bottom left, can't see how many of a creature type are defending a location and sometimes there are even unmentioned creatures accompanying the ones mentioned (can flee from battle but if the unmentioned creature(s) has a ranged attack you can easily lose a hero to it/them), can't scroll with arrow keys/moving the mouse pointer to the edge of the screen/holding the mouse button down, kind of weird way of casting a spell (click on its name in the spells menu and that window closes making the casting activate, need to right click units to check their rank (can memorize their stats though which are shown), ), many screens have icons instead of text (you can right click almost anything for an explanation but some immediately viewable text would've been preferable), some icons have no explanation, hidden "to hit" stat (check the wiki)), no story/campaign mode, some icons are a bit difficult to tell apart, uneven visual quality, no volume options, armies automatically split up if one or more units is slower or has moved already when trying to move, sometimes stupid enemy AI (never casts create artifact to better equip its heroes for example), semi-random element to spell research (can end up with mostly useless spells to research), no multiplayer/human vs human mode, some crappy heroes (tumu?, theria?, brax, rakir, b'shan (except for in the early game), aureus) and spells, meteor storm and area dispel are OP, defender always casts first in battle (means they can cheese you with an OP spell before you can do anything by making you attack a weak throwaway unit), resistances become OP in the late game?, some OP unit+buffs combos (paladins w/ any magic weapons+any defense-boosting enchantment, magic weapons+lycanthropy spell/werewolves+wraith form+defense boost vs ranged/magical attacks - when using a scorched earth strategy since movement speed is 4 tiles a turn and as long as the army keeps winning it doesn't need to slow down for healing, wraiths (garrison raised enemies)+mana focus+high elves+black prayer+11 death books, halfling slingers+certain buffs (add 11 life books and it's even worse), warships+flying+invisibility/other defensive buffs, Torin+create artifact+altar of battle, warlord+altar of battle+gaia's blessing, 5 life books+6 sorcery books+artificer, artificer+runemaster combo (can get back 2x of an artifact's cost), shadow demons?), some OP races (High Men, ), the music resets after each notification message (which is accompanied by a fanfare), trial & error (roaming monsters/raiders need to be fairly close to one of your units or cities to become visible in the top down view - leads to surprise attacks, surplus mana points put into research in the same turn as you finish researching a spell are wasted (aim for a multiple of 10 (or 5 early on) in research, some mechanics like casting skill aren't explained well, need to enter a guarded location to see how many monsters are there, some nodes cancel out your spells when trying to kill the monsters guarding them), very small vault/inventory for artifacts (if you're unlucky with heroes approaching you and lucky with location loot then you'll have to destroy a bunch of artifacts),

Notes:
-Normal is more frustrating with the 1.50 patch? (very aggressive rivals (had a few hell hounds teleporting in and start stealing loot after a few turns, then 12 (!) more a few turns after I beat them) plus locations tend to have overly tough monsters guarding them)

Bugs:
-Picking MT-32, CM-32L or GM music makes the game boot-up, load, and go back to title much slower (20+ seconds for MT-32 & CM-32L, 10-12 seconds for GM; Win10, GOG (DOSBox)) - MT-32 sounds noticeably better on a real module as well
-Buggy diplomacy (self-contradicting triggers (for example a rival might introduce themselves in a friendly manner but then decline a pact or alliance), war declarations that go to a different player than intended, missing features?),
-At one point I got a message that one of my cities was conquered but when I checked it nothing had happened
-Can build roads on water using the other plane/parallel world as long as there's land in the corresponding tile
-Black Sleep'd sprite enemies sometimes become invulnerable
-Unofficial patch (the page lists the other bugs): http://masterofmagic.wikia.com/wiki/Unofficial_Patch_1.50