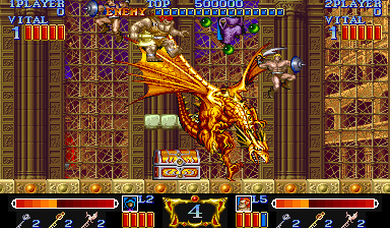 ​
​+
Plays like a mixture of Astyanax/Alisia Dragoon/Black Tiger (stamina meter, unlock doors with keys found in chests or dropped by enemies, familiar/sidekick characters that attack when you do and can be killed and levelled up)
2-player co-op
Fast paced and fairly intense action
Pick starting level out of ~6 floors (there's a few alternate paths but no select screens after that - found one through a spiky vine floor (level 10-ish) I think but not sure if intended)
Temporary armor upgrade (shield)
Weapon upgrade (can be dropped if you take too much damage but you can pick it up again), good enemy and background variation, some enemies can open chests and eat the key in them (you get it back by killing them), smart bomb (costs 1 lifebar, need to press jump+attack (even though there should be a separate button in Mame) which makes you jump each time and it's not 100% reliable either), gameplay tips in some level transition scenes, engrish text ("take me out!" instead of "help me out!" for example), some large and detailed sprites, alternate bad ending (yes/no prompt at the end), hidden chests (can be detected by having the crystal ball), dialogue text can be sped up, difficulty options (separate options for how quickly your HP drains (it constantly drains like in Wonder Boy except slower at default settings) as well as how strong (hp+damage dealt) the enemies are - 8 levels for both, can also change how many credits a coin is worth and how many lifebars a player starts with at the beginning and after continuing), pretty good bosses overall, 6-way aiming with the wizard sidekick (can't shoot diagonally downwards),

+/-
Time limit on bonus items (various effects) and a level timer
Can't move while attacking or while crouching
Very straightforward level design (corridors with a few platforms and traps here and there) - plays more like a side view hack 'n slash No dodge or run moves and your avatar can't aim up or down (plenty of situations with agile enemies coming in from multiple directions) - you can level up the sidekick for better spread though
Forgiving hit detection vs. most enemies but unforgiving when picking up items
Negative item (glowing coal - reduces sidekick's level by 1, poisonous mushroom - makes avatar unable to attack), coins only give points despite giving the impression that they're important (game could've had shops like black tiger), bonus items disappear when moving to the next floor, frequently respawning enemies in some areas, each floor/level is very short, found items disappear after a few seconds, enemy drops can fall into spikes or lava (making them unavailable if you're near death), no sidekick select menu (need to jump past/walk below new ones or wait until they disappear or you'll ditch the one you had)

-
Trial & error (detecting trapped chests - need a thief sidekick, can’t detect trapped cells with either the thief or the crystal ball, can enlist the lizardman without the diamond ring by jumping over the scissors, boss patterns)
So-so jump height control (can jump shorter by crouching but if you do it on a platform you'll jump down through it, can jump somewhat higher by pressing up but the default height is pretty high already)
Level transitions happen too fast to read the story/tips text and stats at once (can pause in Mame though)
Repeats variations of the same bosses a few times
The max stamina attack sfx (grunting voice sample) and low HP alarm sfx get annoying pretty quickly
No item inventory or item switching feature (see Rondo of Blood), so-so use of FM synth and the samples are a bit scratchy as well, short timer during the level select screen (why?), gets kinda repetitive about halfway through (you'll traverse 50 floors in total), the archer and ogre are underpowered, no alternate main weapons, somewhat stiff animation overall, the bonus item you’re using runs out after using it on the current and next floor regardless of how fast you play (annoying with crystal balls if you don’t want to use a thief),

​
Notes:
-Alternate paths can appear at floor 17, 28 and 40 (several new floors will be traversed and then the path leads back to the main one while the game length remains the same)
​