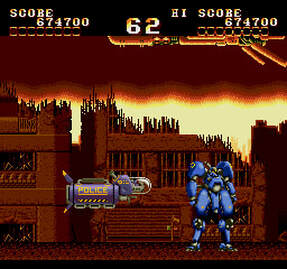 *Without uppercut spam and other cheesy tactics
+
Fast+weak and slow+strong attacks
Dash attacks
Blocking
Good art direction and very good use of the sound chip
Difficulty options (easy-hard)
Some basic combo moves (uppercut (down, down+attack) - can hit twice if close, gun shot - usually dodged by enemies and you can't follow it with a punch quickly, throw (forward or backward+strong attack while close) - don't have much control over them so it's not like in SoR for example where you throw enemies into each other, )
Some nice visual effects (level 4 end, level 5, some cutscenes)
Double jump
Vs mode (like a fighting game, can play as bosses and mini-bosses, supports 2-player vs.)

+/-
Level timers
Doesn't show enemy health bars (does show them for bosses)
No invincibility time after being knocked down and getting back up
Can get temporarily dizzy/stunned if you get hit several times in a row (doesn't matter if you moved in-between the hits)
A dash attack won't take priority over a boss's attack+some can counter combo right after getting hit by one. The uppercut does tend to get priority however and it's also strong making it kind of OP
Can't juggle enemies
Boss rush at the final level - weaker versions at least but annoyingly includes the boss you just beat in the last level
No checkpoints or lives - restart from the beginning of the current level after losing a life (unlimited continues though?)
Doesn’t feature stalking
​
-
Can't really do attack combos besides following up a punch with a dash attack or following a jump attack with a punch and a low kick if you're using fast attacks (see Golden Axe, Final Fight, SoR etc)
Some control issues (bosses can "stun lock" you until they decide to jump - can block it all but it's still annoying, can't map jumping to a button, double tap to dash and can't run, can't map block to a single button (a+b), no 6-button support)
Uneven difficulty (spikes: second boss, third boss, re-facing the second boss alongside a flying orb enemy though you can mostly spam uppercuts, level 5 mini-bosses unless you spam uppercuts; dips: first boss - can stunlock it with fast attacks, level 6 core)
No 2-player co-op
Inconsistent enemy AI (some enemies barely attack, some hang out off screen instead of attacking so you have to go backwards)
Bland level design (no pits or other platforming, no other level gimmicks besides some pointless destructible walls in level 5)
Trial & error (some mechanics, bosses)
Kinda repetitive despite initially good enemy variety and a short length (the last sixth level is also just a boss rush with some enemies mixed in followed by destroying a core, then escaping and facing the main rival mech outside the ship)
Level 4 and level 5 bosses are weak to the same strategy (jump kick to leg sweep+mix in some uppercuts)