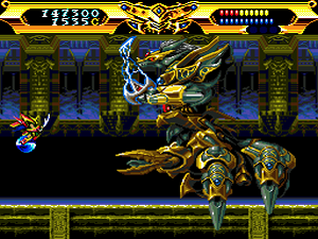 +/-
Normal mode plays like an easy mode in your regular shooter
very easy to afford the best equipment for each level,

-
​Some slowdown
some trial & error (a few cheap hits, your ship moves too slow to dodge some projectiles and enemies)
some backgrounds and sprites aren't as lush as in the PCE CD version (fewer colors though the MD is capable)
hard to tell if you're damaging some enemies (they don't flash like in the PCE CD version)
having to choose a suit and stick with it for the entire level isn't very flexible
​some annoying sound effects, final boss is a pushover on normal (default) difficulty, lacks some sound effects heard in the PCE CD version (though I personally prefer the MD sounds)