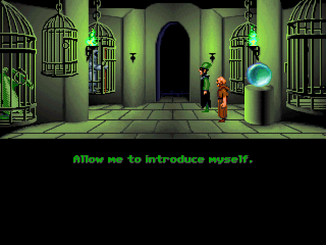 
​
+
Improved audio/visuals
uncut/original dialogue and portraits
basic music themed gameplay (play notes using a magical staff - the Distaff, learn themes (only four notes per theme/draft, no need for rhythm, notes are also color coded when played by NPCs or enemies) from the environment or NPCs which can then be used on things to transform them)
good art direction
difficulty options (only affects how easy it is to learn and play the melodies/drafts)
cinematic touches for major dialogue scenes (cutscene stills, angle changes on backgrounds, animated sprites), story doesn't explain everything right away, skippable sentences/paragraphs during dialogue (.), text speed options, decent animation, the game shows a large icon and a name for what you're currently examining in the bottom right of the screen (can't be moving around while looking at things though unless you click directly on the object/character), you can usually start moving while Bobbin is saying his last sentence in a dialogue/monologue, some parts are a little faster than in the CD DOS version (getting the owl melody), interesting plot twist at forge city, some good puzzles (the sword smith, the final battle), some creative storytelling (looking into the crystal balls for story clues), some decent humour (the dragon, the crystal people’s leader; overall though the tone is more serious than usual for LA)

+/-
Bonus scene shown at the end if you beat it on Expert is shown on all difficulties here
soundtrack consists only of classical music from the Swan Lake (fits the theme of the game but not always the environment you're in and it doesn't go quiet while playing a draft)
can't examine most of the environment
no narrator and descriptions when examining things often consist of just one icon word and a short sentence from Bobbin
no inventory
can't die, need to have learned a draft/melody from the game before using it (can't look it up in the book of patterns or a guide, can get you stuck for a bit if you forgot to double click on the right thing), can't control what you fill things with, can't control dialogue, pretty short and linear, the backstory is on a cassette tape that came with the game (Loom: The Audio Drama), the ending leaves a few knots untied (the game was originally meant to be the first in a trilogy but the sequels were never made)

-
Interface issues (learned melodies don't show up in the UI (need to write them down or check the pattern chart that came with the game), no movement/game speed options (except for the double speed option in ScummVM (Ctrl+F to toggle, doesn't affect the music which is nice), some delay when playing notes, so-so pathfinding, can't skip walking animations, hard to tell where you can or can't go (exits from areas, paths between parts of areas) - often can't walk in the z-direction though it looks like you can, need to walk up to interactive things to see their description texts, no log/journal feature, can't use the in-game book of patterns (it comes in paper form with the game and only serves as a notebook for the player - odd that you can pick it up in-game at all and there's no explanation by the game)
plenty of dead space
no voice acting and the dialogue is slightly different in some scenes than in the DOS CD version
the distaff notes sound worse than in the DOS CD version (however when learning melodies there's more timbre variance - for example the owls sound like actual owls instead of like the Distaff)
limited options (no alternate puzzle solutions?, no action icons or typing system, can't run or jump, can't be evil, can't initiate dialogue or examine NPCs sometimes), some far fetched puzzles (cast cloak _on the workers in the tower_ from outside to cloak yourself while at their location (it looks like the guild members in the woods use the spell on themselves and not on Bobbin earlier), some red herrings (the leaf in the beginning, filling/emptying some objects), worse color use for the icons than the rest of the game (EGA-like palette), difficulty dip between forge city and the final battle