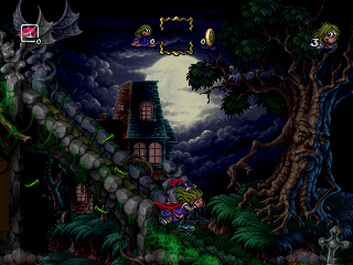 
+
Lush and vivid environments (great animation and attention to detail, expressive characters), some nice effects (scaling and rotating sprites, sparse use of polygons, enemies moving in from the background, movement going on in the backgrounds
Some interesting mechanics (barrel rolling, create your own platforms in mid-air (lemmings), 2.5D elements, bounce between layers using springs)
Grab onto platforms and hooks dynamite headdy/EWJ style
Unlockable bonus level at the end of each level (pretty lame though - just a big room with a bunch of money bags)
Fast paced overall
Ambient sounds in stereo, you can bounce out of water once (avoiding death) if your timing is good (easier on PS1?), pretty cool final boss (yoshi's island style), look up/down whenever you want with L1/L2, ​most mechanics are explained in-game (though not always at the right time and it's fairly easy to accidentally skip the explanation (can't be repeated without dying/reloading if you do)), the game warns you about some level hazards (! mark),

+/-
Very generous with checkpoints
Some effects could've used transparency (light in level 1, explosion particles; other effects like foreground clouds do use it on PS1)
Not much use for the run button
Why are you standing face to face with the villain in-between levels?
Pretty non-descriptive map screen in-between levels
Password save after each level (pretty short, uses PS1 buttons in both versions), 8-10 seconds of loading at times in the PS1 version, very easy enemies overall, need to pause to pick abilities, limited uses for each ability (sometimes feels unnecessary), no shops, can't replay beaten levels?, can't make Lomax shut up, fairly cheesy 90s pop music used at times

-
Somewhat slippery control (Lomax takes a few steps after releasing the d-pad or after landing from a jump and precise platforming is sometimes required)
Lomax has to jump to attack (he auto-jumps when you throw his helmet; although you can duck to prevent it it feels unnecessary)
Pretty much every mechanic is borrowed from somewhere else (sonic, taz-mania, mario, wonder boy 3, yoshi's island, dkc etc)
Sometimes hard to tell what's part of the background or foreground (some pillars, the polygon bridges in level 2, explosion particles - some transparency effects and difference in saturation on sprites and backgrounds would've helped)
Unforgiving hit detection on some platforms (swinging logs - you fall off if the angle is just a bit steep), some sloppy hit detection (rolling barrel doesn't respond to your movement right away, rotating log platforms - I once fell right through one in the PC version)
Pots containing gold and items sometimes pop up after you pass them and you have to run around in one place to pick up gold from bags (breaks game flow)
Helmets from pots bounce away to the side and their hit detection is somewhat unforgiving (hard to grab them in some areas)
Some trial & error (see bg/fg problem, some mechanics, the vertical 'rolling barrel' section - you have to stand on the barrel for a second or Lomax won't 'latch onto it')
Z-movement (into/out of screen) is a bit clunky since you can't stop or jump while doing it
Some effects seem added for show without really fitting in (ambient cow sound - where are the cows?, the particles on bombs and such - screen gets too cluttered at times)
Lacking in secret areas and puzzles (bomb- digging- and platform creating mechanics seem like they would lend themselves well to this type of level design and since it's inspired in part by Lemmings you expect it - digging in particular is boring and shallow), some tedious vertical parts where you can be forced to redo half the sub level if you fail a jump, somewhat lame boss fights (more like obstacle courses/chase scenes than fights, the zoom effect on missiles is not done as well as in some earlier games, obvious rip off of sonic, music seems out of place and there's no fanfare when you beat them), fairly repetitive (repeating ideas and similar looking backgrounds, similar functions for some abilites), lacks a sense of progression (feels more like a bunch of levels with no escalation towards the finale), lame ending, lacks the hub world and some of the variation in environments that Flink had

​
Notes:
-Some music glitches in ePSXe