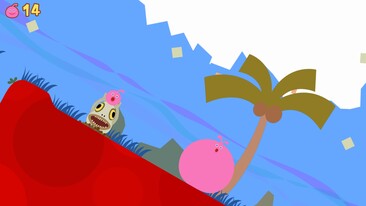 
​
​+ Bouncing ball avatar with some unique properties (grows for each flower eaten and gains 1 HP, can be split into smaller balls up to your current HP number and then rejoined by the press of a button - can also stop halfway and have a few medium sized balls moving in the same direction (the more HP/balls you get the more harmonies can be heard in the music?), ), move around by tilting the level ~30 degrees to either side and by jumping, some creative level design (shapeshifting floors, small paths requiring splitting the ball up, elastic surfaces and avatar, surfaces that make your avatar tremble, squeezing traps and some other objects split your avatar into smaller balls, some NPCs temporarily change the shape of your avatar), your avatar(s) sings along with the soundtrack, pretty unique art direction, ranking system (items collected, HP, time taken), charge jump (SMB2?) - only way to control jump height, dynamic zoom (Samurai Shodown?), built-in screenshot feature, breakable walls and hidden paths/items, some levels take place inside a creature (NewZealand Story/Yoshi's Island), can restart a level or return to the level select screen at any point, house building mode (three sizes; pretty basic since can only place some platforms in and around a base house structure and then watch a CPU controlled avatar hop around in it - however if you use the platforms right you can make these chars reach collectibles which grow the houses further), five additional chars which you'll unlock during the game (only affects the singing voice in the music though),

+/- Very cutesy vibe (child/chipmunk vocals in a nonsense language in parts of the soundtrack - sometimes annoying (1-7 and 1-8)), linear structure, no level time limits (optional "time spent" display), some automatic rollercoaster-like level gimmicks (similar to Sonic) which could've been more fun if controllable, eating nuts makes your avatar do small jumps in beat to the music for a short while (can be annoying in some situations), pretty easy to beat but very hard to 100%, unskippable but short cutscenes, skippable boss fights,

- Many points of no return in each level, your avatar starts hopping left or right randomly if you press only one direction or let go of the buttons for a few seconds, can't stop quickly (partly because you can't speed up the tilting motion, makes most precise platforming rather frustrating), no button config (would've been more comfortable to have jump mapped to a face button rather than L+R since they also tilt the screen), can't tilt all the way around or up to 180 degrees (a temporary wider tilt move based on energy or ammo would've solved the points of no return issue), can't speed up the score countdown screen, no manual control over the zoom level - leads to more trial & error when moving quickly into danger or near collectibles, some delay when encountering NPCs and waiting for the game to register that you have enough HP to make them help you (and at the end of each level), no invincibility time after touching a spike (and lost HP/balls move the same way you do making it hard to retrieve them and get 100%), no difficulty options, repeated and very easy bosses, finding certain breakable walls requires trial & error,
​