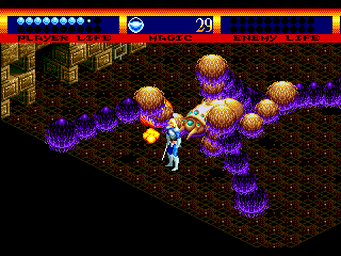 +
Jump shadow
Diablo/Landstalker-style gameplay
Good puzzles overall (some interesting physics based ones, nice musical puzzle)
Interactive environment (you can even push people around in their shares/along with whatever they're interacting with without slowing down or them reacting which is a bit weird)
Solid map system (shows known layout and regular room connections)
​Great sound design overall
Large item inventory with sorting feature
Some large and detailed sprites
Decapitate enemies (no blood though)
Simply touching enemies generally won't hurt you (similar to Shinobi but here you can even stand on them) and you can often push them around as well
Some nice effects (wind particles and light beams, polygonal objects), pretty good bosses overall (some are defeated pretty much by button mashing though), town portals (one per floor? also lets you teleport back to a previous floor), fairly frequent save points (only one slot per game though), spell combos (similar to Gunstar Heroes), some interesting items and spells (goblin costume, tap handle (flood and drain some rooms, invisibility potion (enemies ignore you and you can steal from shops), ice - freeze enemies, shield spell, judgement - smart bomb), enemies can accidentally hit each other with projectiles, fast resting at the inn, some hidden rooms, decent AI overall (goblin archers can be button mashed though and the shield+sword knights act kind of randomly), good use of colour overall, mini-bosses, decent intro cutscene, pretty good voice samples, somewhat comical (the cat's "shop" in the dungeon)

+/-
Longer sword reach to the left and right than in other directions
Pretty corny/stuck up sounding dialogue overall
No NPC reaction from being pushed around (see above)
No dodge or run moves
No blocking?
Zelda-style enemy respawning (seems a bit more frequent here though)
Can't move while swinging your sword (unless you jump)
Can't pull objects (would've made puzzles easier but smoother to perform the solution to)
Can push objects while in mid-air
Auto-use healing items feature (can be turned off)
Many different items that have the same effect, some enemy projectiles can be bounced back, can't smack enemies around due to fairly long invincibility times, can't carry bombs around?, linear structure, no charge attacks or alternate sword swing types, unintuitive barrel physics (moving objects under a barrel doesn't move it when pushed, standing on a barrel that's on a moving platform makes it so that you fall off if you don't keep movin along with the barrel), fairly easy to farm for health items on the first dungeon floor/b1 (the lilypads (often give 110 gold) stop giving you anything after beating that floor though?) - worth it since money is scarce (until the goblin arena) and the available gear in town is expensive, there's an item on the second dungeon floor/b2 that lets you teleport to the nearest town portal (sextant) but it's very hard to find, the battle arena is an interesting idea but limited by how you can only face one encounter (four goblins with clubs), can't stand still and swing in different directions (Diablo style), "a door opens somewhere" (never that hard to figure out where though), some gear can only be dropped by enemies and very rarely at that (mitt glove - cowboys and ninjas on the fifth floor/b5; you can also get the best armor (gold armor) from b1 lilypads if you're lucky)

-
Sometimes unresponsive sword swing when near a wall/object
Movable objects can only be moved diagonally (makes puzzles more tedious overall)
Hit detection and judging distances takes some getting used to (it can be hard to hit smaller enemies with magic (ice's projectile is small and slow), foreground objects don't become transparent/dithered, can't rotate the camera)
The pause menu theme restarts the current area bgm when pausing and unpausing (some dungeon floors also have a few too many different themes spread between their rooms so you won't get to hear some themes in full unless you hang around in one spot - at least it lets the music fit better with each situation)
Healing fountains and save points aren't marked on the map
Somewhat generic looking sprites and portraits overall
Freeing the hanging prisoner (so-so hit detection, can use magic here though)
Some trial & error (hidden time limit on the costume and you lose a little bit of life after using it, finding the right tombstone to push in the beginning, the penumbra/moon statues puzzle (need to look up the word for a proper clue))
No difficulty options
No randomly generated maps mode
Odd that your char doesn't recognize the bad guy before he takes the orbs from you, some goblins outside of their town can be killed without retaliation while in costume, glitchy hit detection in one of the puzzle rooms with two barrels + a locked door + a platform responding to weight (can't move from the platform to a block despite them being on the same level so you have to get around the part it by slowly wiggling your way through), no in-game stats for gear, can't grab the food from the goblin guarding it even after killing him (unless you entered the room in normal form but even then you can't carry it with you for some reason), some tedious platforming and puzzles (the wind switches+boulders puzzle), some slowdown, can't level up spells, one of the detours for a piece of armor (which involves a fairly long simon says-puzzle) is kind of pointless since you can find a better one on the same floor, no alternate weapons (bows, spears, morning stars etc.), new gear doesn't show on the avatar's sprite, a few annoying sfx and music tracks, solved puzzles still reset (can be annoying if you missed something and have to backtrack, kill all enemies-rooms generally don't reset so why not puzzles as well?), the trial by fire room (unavoidable hits), can't discard items (can sell them but only at two points within the dungeon (cat on the first floor/b1 and goblin on the third/b3), guardian spell is kind of ineffective, confuse spell doesn't confuse the enemy, certain villagers seem like they should have had subquests attached, but end up being pointless, crappy puzzles in the modern road/zombie segment (just need to watch for which lamp post lights up last and hit it), random difficulty for the fat flying demon (sometimes he'll keep healing himself over and over, sometimes not at all), easy final boss, pretty bland dialogue overall and it doesn't update much in town