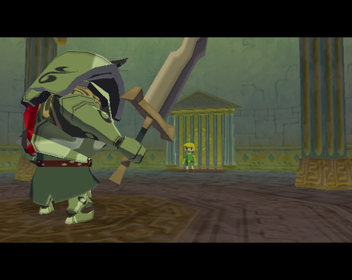 
​
+
Nice art style using celshading, great animation overall, nice weather and lighting effects, surround sound
Some interesting and funny characters (very expressive models for the time)
Counter attack move (only works against some enemies?)
Can control certain animals by using bait (seagulls - scout areas and press certain switches, pigs - dig for treasure by luring them to certain spots)
​Bomb cannon upgrade for the boat
Can pick up and use some enemy weapons (can't hold onto them for later though)
Warp song (lets you fast travel to certain spots on the map - Link's Awakening)
Slightly more advanced music element (choose the beat (3/4, 4/4, 6/4 time signature) manually - how you do it is not explained in the tutorial though)
Large overworld to explore (fairly open in terms of side content, treasure hunting (similar to Pirates!))
Some new items (telescope, pictograph/camera)
Interesting setting (sail between islands in a flooded world - Waterworld inspired?)
New races
Helpers aren't as annoying as in the N64 games
Not the same old story (but still fairly cliché)
Some good puzzles (last part of the final dungeon, use the wind to travel by giant flower in the third dungeon (similar to Monster World 4) and to move some objects, Jabun's cave entrance, sunken castle cellar entrance (triangle blocks), earth temple light beam puzzles)
3 warp points per dungeon which you can move between as you find them, mini-map feature (two levels of zoom), day/night cycle with some changes to gameplay (Simon's Quest?; however you can't simply wait whenever you're on an island - you need to use a certain song to make time pass), Zelda and some other NPCs are more active in helping the hero on his quest, ​sometimes comical tone (the battleship game, ), quite a few sidequests, dynamic music change when encountering enemies (PSO?), can jump manually but only while in the boat, multi-targeting with the boomerang (similar to Panzer Dragoon except here you use one projectile to hit several targets one after another in one throw), good bosses overall (most of them are too easy though), hyrulian language (beat the game to have it translated?), some interesting enemies (statues which you need to shoot in the eye and then throw a bomb into via their mouth and which then spin towards you before dying, the dark blobs which you have to petrify with light and then smash/use as weights), some memorable locations, mail box system (NPCs send you items and info as you progress through the game or finish side quests), some new mini-games (the Battleship board game isn't great but the golf mini-game in the southwest is pretty fun), sometimes adds new enemies when backtracking to make those moments more interesting (Circle of the Moon?), pretty nice ending (bittersweet)

+/-
Linear structure in terms of the main dungeons/main quest (the boat actually makes you turn back if you try to explore early on; could've opened up more towards the end but makes you do the earth temple before you can find the wind sage)
Auto-jumping
Rehashed enemies and items (yes, the leaf is a rehash)
Can't move during dialogue (Chrono Trigger)
Save anywhere
No real voice acting (characters occasionally make funny noises during dialogue instead)
Can't climb barrels
Can't carry most items through doors in dungeons
Can't lock onto objects when throwing something
Can't empty a bottle of water in the second dungeon to create a platform (can only use the placed water-filled jar though to be fair it is larger)
Collectathon tendencies (triforce shards, golden feathers, water for the withered trees, joy pendants, nintendo gallery quest, heart pieces, etc.)
Some fall damage (but you have to fall very far)
Can attack but not hit NPCs
Consumable enemy drops disappear after a few seconds
Can't play as Tetra/Zelda
Square-shaped world map, no invincibility time after climbing back onto the boat after having been knocked out of it (can be annoying when attacked by 3+ sharks and/or ships at sea), boss gauntlet in the final dungeon,

-
Need to own a GBA to use the Tingle Tuner item (helps you find some things (tingle statues and the NPC Knuckle, makes Tingle act similar to Navi in dungeons) and gives additional info about islands as you approach them, bomb attack at a fee, temporary hover boots effect at a fee, call a shop anywhere after upgrading it, its map sorts the islands by importance and allows marking of long distance destination)
Rupees picked up after getting a full inventory are wasted and you still get them as enemy drops while at the current maximum - especially annoying when finding a silver rupee (worth 200) as a treasure
Slow start (many tutorials and fetch quests for the first couple of hours, stealth-based first dungeon with no boss fight and then no dungeons for the next hour or so of gameplay, )
Pretty slow paced overall (unskippable cutscenes, first two picto quests (the composition requirements are also rather picky and sometimes non-sensical - for example the stalker should be photographed from the back rather than the front), slow shimmying and very slow movement while charging your sword attack, changing the wind and commanding escorted NPCs is kinda slow (could've been done by picking the melody from the menu after learning it or at least letting you skip the cutscenes), somewhat slow ladder climbing, some waiting for moving platforms, can't speed up some info and dialogue text, some delay before a killed enemy drops an item)
Dead space (lacks enemies/obstacles throughout most of the sea area)
​Various control/interface issues (switching targets during combat isn't quite as reliable or efficient as it could be, defending and calling on an escorted NPC mapped to the same button, have to carry escorted NPCs through doors or they'll stay behind and get teleported to the beginning of the previous room, fairly easy to accidentally hit a wall or object instead of the enemy when fighting in cramped spaces, have to stand very close to Medli to call on her, can't cycle through gear/sub weapons - you'll end up going into the menu for the grapple hook and the sail a lot, can't move while shooting the boat's canon, you have to stand exactly at the right spot in front of things to interact with them, the game repeats certain tutorial messages, acceleration is too binary/sensitive when trying to make a shorter jump, picking up loot from fish enemies is too clunky - should've pulled it towards you when close, the game is overly picky about your positioning when digging for treasure at sea, can't aim straight up with the boomerang nor below your waist with the grappling hook (it's a bit lame that you have to upgrade the grappling hook to the hookshot to unlock stuff like this), somewhat annoying camera in tight areas and in a few spots you can't aim upwards properly while using a ranged weapon, no acceleration controls while sailing (annoying when trying to align yourself with a treasure chart marking and while you can use "cruise" to move without the sail it's rather slow; sometimes there's a sound hint when near enough but not always), no mini-map outside of dungeons, somewhat clunky chart menu controls (d-pad takes you out of the menu), )
Can't ask anyone you want about the current quest (leads to some tedious methodic searching)
Wallets/bottles/item bag requirements (especially annoying with the bottles since potions already come in a bottle)
​No quest log/journal feature (quest status only shows your main quest progress) and you can't make notes for yourself in-game - the pictograph could've been used for notes if it had much more film capacity
Many NPCs are just standing around doing nothing
​Link's voice gets a bit repetitive
Silent protagonist (breaks immersion more when there's less abstraction in character interaction)
Some trial & error (earth sage's location and how you have to find her before finding the wind sage, can't examine the wind symbol in the tower dungeon in the original version, the tunnel maze in the jail on windfall island, the ghost ship chart warp maze, sometimes if you accidentally jump off a cliff there's no way to go back to land forcing you to wait for Link to drown and respawn, )
Can't call on your helpers/party when you need them - they call you
Sailing is a bit dull (not many events and simple mechanics)
​Only one save slot per game, some inconsistency in what you can climb, regular enemy AI is a bit poor overall, some tedious parts (some where you have to redo a longer segment if you miss a jump (forest haven island, wind temple), how there's three steps to finding each triforce shard - have to find a treasure chart then have Tingle interpret it to be able to find the shard), can't land on the small ledge with the nintendo gallery switch on it due to an invisible wall (have to use a seagull), some crappy treasure, overly expensive items in the heart piece ship shop, can't leave a quest related island once you reach its shore, somewhat short draw distance before the visuals become blurred, the villain tells you what you need to defeat him, overly drawn out final puzzle in the earth temple, so-so replay value (no difficulty options or proper second quest - helped somewhat by new outfits and a translation of the hyrulian dialogue), pretty easy final dungeon, you never get to see what kind of world the heroes create for themselves in the ending 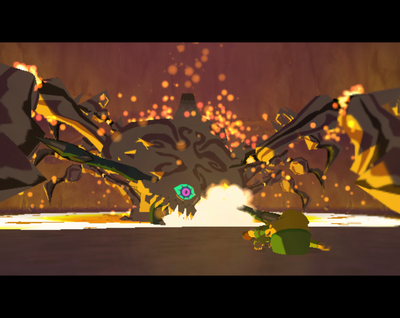 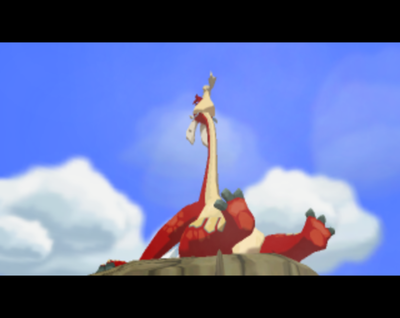 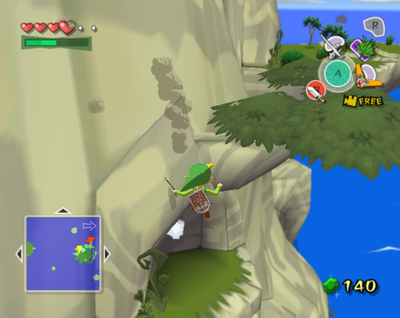 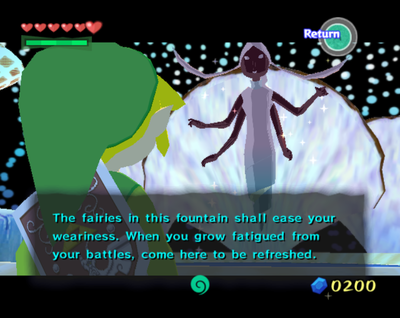 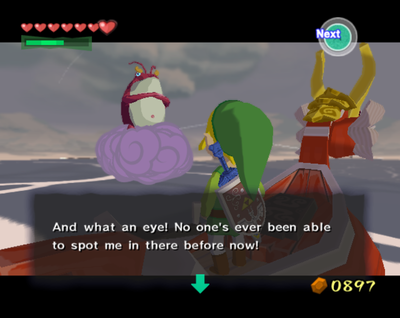 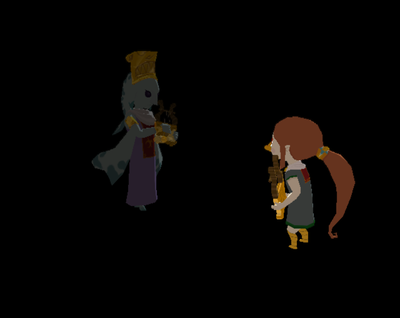