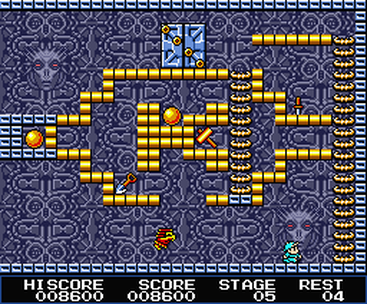 
​
+ One new weapon (boomerang), three new digging tools (drill - two 1x2 blocks horizontally, hammer - one 1x2 block horizontally, shovel - one 2x1 block downward), basic level map feature (shows room connections plus the gems and the exit locations but not the full layouts with ladders and platforms), password save (short) after each level, level editor (can save levels), Lode Runner/Montezuma's Revenge-like gameplay, a thrown weapon stays in the level where it landed (but can also keep flying indefinitely in a looping segment of the level), pretty good enemy AI, some interesting level design additions (levels tend to loop around horizontally and/or vertically like in SMB2, one way gates/revolving doors that change direction after passing through them, pushable 2x2 blocks, disappearing floors and ladders) and puzzles, decent animation, two new enemies, some hidden bonus levels (tricky to find as you need to fall or jump at the right spot, some of these are sound test screens with the keys of a keyboard representing each track selection), can now wiggle your avatar into a 2x2 tile space after falling if you made a jump forward before falling, much longer (60 levels),

+/- Ladders replace staircases (could've had both), can now see the exit from a level right away and have to consider how to get to it with your tools, can't jump while carrying an item, can't perform a melee attack, enemies respawn pretty quickly after being killed, no time limit, can get stuck and then you'll have to lose a life to restart the level (press F5), no fall damage, forced collecting (of gems/crystals (soul stones) - they all have the same color here) to progress, the pickaxe can dig two 2x1 blocks downward at once, one hit deaths, can't carry an item from one level to another, can't jump off of or onto ladders (can at least walk off of ladders here but you'll fall straight down), can jump in two blocks tall spaces without bouncing back down but not one block tall spaces (but if you jump into a one block tall space you'll pass through the "roof"), forgiving hit detection on a ladder (in terms of being hit by an enemy not on a ladder while your avatar is on one and vice versa), the bonus levels are just block sliding puzzles, can't move back to a previous level anymore (no point anyway but they could've turned the game into more of an action adventure), some advanced but obtuse mechanics (can despawn an enemy by closely following it between screens, can stand at the very edge of a 2x2 block without being hit by an enemy on it, can jump and grab a weapon that just stopped spinning to carry it with you while jumping), level tiles are now divided into breakable and unbreakable blocks, lose some forward momentum when jumping,
second loop (didn't seem harder? tried one level),

- No continues (unless you input the password "tryagain" which lets you continue with F5) and you start with 0 lives (you gain one per finished level though), some control issues (some delay when attacking, can't throw a sword or boomerang while on a ladder, can’t jump up to a higher platform if there’s a pickaxe there (you’ll grab the axe and fall back down)?, can't control jump height or length, can't move sideways in mid-air after jumping straight up, fall straight down after moving off of a ledge - this is important for certain puzzles though), still can't drop an item instead of throwing it, some trial & error (can't destroy a 1x1 block hovering one tile above ground (level 28) with the hammer, can't hear an enemy coming from off screen, need to keep track of elements from more than one screen without a proper overview (some stages are also twice as big as in the prequel (2x2 screens)) - sometimes you'll screw yourself over without realizing it until 5-10+ min later, hidden traps that change the layout of a room), repetitive, no difficulty options, no power ups, tedious waiting for enemies to move into place or despawn in many levels, sometimes uneven difficulty (easy level 29 for example),