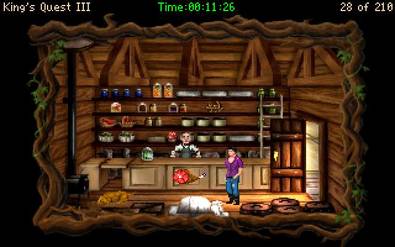 
+ Improved spritework/color use/backgrounds (new angles, better sense of depth, some more zoomed out scenes, more consistent presentation (better stills, no crude 3D or cheap Photoshop-like stuff), etc.), improved interface (roughly on par with early 90s Sierra games, no need to type out what you want to do), teleportation (the magic map - more locations are drawn in as you discover them), more interesting premise (play as a wizard's slave trying to break free - related to Hagatha from the previous game), more fleshed out story and characters than in the original (it also ties into the prequel more), adds some new locations and characters (the bard, treasure island, etc), more spell creating, the timer pauses while reading text/dialogue and while browsing the pop-up menu, more consistent VA quality, game speed options, some good humour (sarcastic, surreal, silly, puns, sometimes funny punishments from Manannan when failing to do your chores), many ways to die, points system (get more points for better solutions to puzzles and for being thorough), some alternate solutions (Medusa - doesn't seem like she learned anything from it though, no need to get the random teleportation or animal understanding spells?), some interesting spells (cause storms, transform into an eagle or a fly, listen to animals), more forgiving gameplay in parts (use some spells over and over, easier mountain path, etc.), nice intro and ending cutscenes, some good puzzles (trap door to the lab, transforming Manannan - satisfying new cutscene here, yeti chase/battle, parts of the treasure island),

+/- Time limit/timer system (shown but not explained in-game (read the manual); when it goes red you need to be home or Manannan will catch you (or kill you if you have any of his forbidden possessions (items with a blue glow) on you), darker and more serious tone (less humourous but also shorter object descriptions overall, the slavery and murder themes, etc.), Manannan never enters Gwydion's bedroom, need to wait for Manannan to sleep or go on a journey before you explore (however you can speed this up by sleeping in your bed), more stealth elements (hiding what you do from Manannan - you need to close opened drawers, hide forbidden possessions under your bed, etc.), how does Gwydion keep time?, save anywhere outside of a cutscene (nameable saves (short character limit though), 20+ slots), pop-up interface at the top of the screen (fairly easy to accidentally trigger), no health meter, open ended beginning (no clear goal at first, many accessible screens, you can get tons of different ingredients from the get go provided you can avoid Manannan), would've been nice to be able to also type out actions as an option (to try out different things and see the results), the backstory is in the manual, the world doesn't wrap around here either (was a weird feature in the first game but it did help somewhat with backtracking), enemies don't follow you to the next screen, F5 (quicksave) also skips dialogue (as does right clicking; fairly easy to skip a text box by accident), you can use a blank page from the previous slave's journal to keep track of needed ingredients but I'm not sure how you rip it out (if was suddenly in my inventory at one point but I already had every ingredient by then), the animals don't say anything (?) helpful in terms of progressing through the game (but they do add some character to the world)

- Trial & error (easy to get yourself killed during spell mixing (could've been more forgiving with using the hand icon in the inventory (in previous games this icon made you further examine most items by touching them rather than using them right away), need to have money on you to be able to browse the shop items, only the porridge respawns after use (need to hide the cookie that turns Manannan into a cat in some regular food), ''didn't you read the warning label?'' - there wasn't one!, some NPC appearances and events are randomized (set location but you might have to re-enter several times - cat killing the fly in the telescope room, rogue sleeping in the tree house, bear family being outdoors, fisherman being on the pier, mermaid, etc. - some of these are important while others aren't), can't fight the rogues?, finding the spineless cactus, Manannan does notice if you've taken his wand (but none of his other things?), the cat can kill you when in the cellar stairs, magic map can only be used outdoors?, can't swim (makes sense here but there's no warning given), hard to find the scroll in Manannan's closet (also have to search several cloaks (getting the same result from all but one) to find the key since you don't know in which one it is), unexpected falling off platform edges if you haven't played the prequels, why would Gwydion sit down and eat his master's food next to him when he wasn't hungry if you tried to eat it before?, getting caught and killed by Manannan (can create dead ends if you save right beforehand); see timer system above, need to investigate Manannan's office desk several times to get the letter from it (same thing with catching the cat - first time you try it will usually escape)), can't press Esc to skip walking animations anymore (can still skip some in-game cutscenes though like when doing the chores) and you can't run, the timer doesn't pause while looking through the inventory, game's picky about how you stand when trying to grab the animals in the beginning (tells you to stand close but it doesn't always work), it's a bit weird how Gwydion immediately thinks to pluck the wings off a dead fly when you interact with it (especially when the narrator doesn't explain why), pretty limited options at times (can't use the sleeping powder on Medusa (it's a dark and wet place), can't get into most of the houses while in fly form (through the keyhole or windows?), can't go up to the house in fly or eagle form the same way that you came down? (there are shortcuts from the house area to the west and east), also can't fly out through the window in Manannan's bedroom, can't be evil, can't take the first broom with you, ''you're not interested'', can't look where you want using the telescope (could've been used as a map feature), can't jump or swim), having an interact button instead of typing out actions sometimes causes problems (you'll automatically throw the knife at the web for example - isn't effective and makes you lose the knife until you get through the web via the somewhat far fetched correct means (flying into it as the eagle)), can't quickly cycle between the items (could've been done by right clicking the item icon in the pop-up menu), can't skip most in-game cutscenes (walking up to objects to interact with them, walking into the distance, catching animals, etc.), sometimes no clear indication of where there is or isn't an exit to an interconnected area (such as the walk icon changing or whatnot; it's not always obvious where you can walk into the horizon for example)), still no action hotkeys (see Maniac Mansion Deluxe), still no journal/log feature, some backtracking (more if you didn't find the magic map), a bit tedious talking to animals as they often repeat what they just said even though they have more new things to tell you, NPCs that talk without you engaging in conversation with them will pause the game (there could've just been text popping up near them like in Fallout etc.), logical inconsistencies (can't listen to the rare blue frog near the waterfall, Manannan notices salt water in the cup you got from his house but not that the bowl of porridge isn't from his house?, can't use the storm spell to fill up the hole in the rock (spellbook page; you sometimes get a message stating that the tree soaked up most of the rain but the game doesn't tell you about how water seeps out of the hole unless you try to fill it with the cup) - need to waste the refilling cup you got from the bard, can't fill the cup or flash with fresh water), poor movement controls when transformed, sometimes smudgy shading/sprite definition (the dragon), Medusa’s VA sounds very French, some slow parts towards the end (cleaning the pirate ship, drawn out and easy walk back to the castle after beating the dragon (lacks urgency; rosella being a damsel and the father's cameo also seem kind of like an afterthought)), nothing to the honey/mermaid/fisherman/snake hatchlings (red herrings) and no way to befriend the bear family?, can't cancel the move while Gwydion is walking towards an object you're trying to interact with