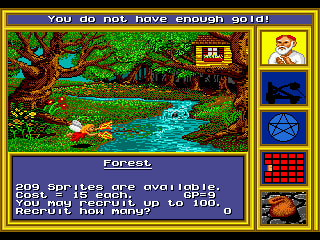 
​
+
Laid the groundwork for the Heroes of Might and Magic and KB series' SRPG gameplay (explore/recruit and command armies/conquer castles/cast spells/do bounty missions with a hero avatar, can choose gold or leadership (exp in HoMM) when finding gold chests, relic quest with map pieces you have to find, creature themed weeks, neutral creature dwellings, enemies encountered in the field might offer to join your army or flee if outpowered, hero artifacts (8 slots here), your hero can cast spells but not participate directly in battles, minor RPG-like encounter descriptions when finding certain items)
Fast movement
Rent boats (500 gold per week - can be lowered to 100 if you find the anchor artifact)
Pretty good map system (auto-map, shows your x/y coordinates, shows points of interest as red dots (including towns, signs and bridges) and castles as white, shows terrain types)
Commission/salary is given by the king once per week and can be upgraded by conquering castles+gaining rank+finding minerals
4 playable heroes (different starting stats+rank increase requirement+starting troops and the sorceress can cast spells right away), avoidable enemy encounters on the map/field (can be tricky due to the zoomed in view though), neutral towns (take on a mission (bounty hunt for an enemy hero), gather information, buy a spell or siege weapon, rent a boat/cancel a previous rental), some interesting spells (bridge spell (creates a permanent bridge across a river and multiple bridges can be combined, teleport spells (one for visited towns and one for visited castles), find current villain, time stop, instant army - random stack is adding based on your class and rank, raise control/leadership - lasts one week, combat teleport) and enemies (ghosts - absorb enemies into their stack, vampires - heal the amount of damage they inflict), some shortcut caves, animated character portraits and battle units, can wait until the end of the current week, memory cursor for ranged units, difficulty options (easy-very hard/"impossible?" - affects number of days to find the relic and your score), battle speed option (how quickly the enemy units move), separate sfx and music on/off toggles, wait and pass/skip commands during battle, unit affinites (some combos decrease or increase morale which affects damage output, NOT based on their faction/"race" besides undead creatures - see the manual), can speed up relic searching by defeating the main villain (Arech Dragonbreath, from 10 to 1 days), shows unit stats in-game (Master of Monsters or Famicom Wars?), fairly large world (4 continents/separate maps although the first one has about twice the castles and towns of the 2nd and 3rd and the last one has only 3 of each), creature dwellings+enemy encounters+villain locations are randomized for each game, can fly if all of your units are flight-based (however sprites don't count here "due to their inability to keep up with the other creatures", archmages can fly apparently),

+/-
Real-time exploration
Non-linear structure (soft gating via tougher enemies - can't explore anywhere at once but there is some choice, can choose between villains to get a contract (bounty mission) for)
Time limit (each day lasts about 10 seconds in real time, time pauses during a weekly report/during battle/while in a menu)
Infinite lives? (losing a battle makes you go back to the king's castle and your siege weapon is lost but you keep your money)
Can only control one hero per game
Password save only (very long and doesn't save field encounters killed/orbs found/sound and speed settings), resource management (unit and boat upkeep - game shows total balance and breakdown of income and cost at the end of each week, garrisoned stacks don't cost upkeep after the initial garrisoning cost), the world map is divided into 4 continents (have to find info on other continents first to be able to sail to them?), no exp system for your units and your hero only has leadership+spell power+spell capacity+promotion rank stats here (leadership affects morale and how many creatures per stack you can recruit in total - 1 LS=1 creature hitpoint for each stack, gaining rank is similar to leveling up and affects what you can recruit+your spell power+spell capacity+leadership+commission - it's increased by revisiting the king after capturing enough villains and the quota increases throughout the game, one artifact also increases spell power) - can increase unit attack and defense/chance to dodge with two artifacts though, can find an orb that reveals the whole continent - can even toggle it on/off to show where you have and haven't been, no tutorial but a gameplay demo plays if you leave the game on at the title screen and the manual is pretty detailed, spells are consumable items - can't rest to restore them, can still find and use additional spells past the max spell capacity stat (it affects how many you can buy and can be increased by finding the Book of Necros+via some encounters+by increasing your rank), have to buy a siege weapon to be able to conquer enemy castles however the siege process is automated, can only have 5 different unit types in an army, lost creatures decrease your score (oddly enough each creature is worth the same), slower field movement on sand however enemies can't move there so you're safe (no other terrain effects), limited ammo for ranged units (replenishes in-between battles - is only shown when aiming with a stack) - can't be upgraded, it's possible lose control over a stack by accepting units of the same type to join your army when you don't have enough leadership to control them - makes them sometimes attack your troops in combat (could've been changed to that you'd recruit only the allowed amount or be able to dismiss the surplus creatures), town and castle coordinates are listed in the manual (not in-game though; would be better in terms of exploration if they were listed in-game as you found them), can let castles be re-conquered to grind for money, demons have a small (10%? seems sometimes more common, sometimes less) chance to halve an enemy stack - pretty OP, can't move through your own units, the freeze spell is a bit too cheap (ranged units are pretty strong here), enemy armies don't grow stronger over time?, the game doesn't seem balanced for a full conquest (castle armies are much harder towards the end and you can't keep up with the costs of an army large enough to deal with it so you have to know what you're doing and act very quickly), no deployment phase

-
Some interface/control issues (can't split stacks, no proper warning when you're about to lose creatures from having too much upkeep (this combined with no splitting means it's fairly easy to suddenly lose several stacks), hit boxes are larger than it looks - can't get through some narrow paths that look like you should be able to, can't discard spells (can dismiss units), can't cancel casting a spell, have to go into the menu to check the map and the field view is a bit too zoomed in compared to later games - makes it harder to spot and avoid enemies (the puzzle map in the GUI could've been a mini-map instead), unlike on PC you can't examine an enemy army before fighting it nor can you choose not to fight (can examine enemy castle armies by gathering information in neutral towns, can use Time Stop to freeze wandering armies in place but it's pretty rare and doesn't last for long), can't examine an enemy stack during a battle and can't see how much HP the top creature in your own stacks have left, stiff movement around obstacles, can only gather one piece of info from any town and there's no journal so it's best to write it down for later, towns and castles aren't named while in the field view and they all look the same - owned castles and visited towns should've switched to pink or something, various creature dwellings also look the same on the field, can't examine artifacts in your inventory, have to memorize which town had which spell, ), Some trial & error (Time Stop doesn't work when on a desert tile - even stops working if you enter one, Resurrect doesn't scale for weaker creatures (you still only get ~3-6 back) so it's a huge waste to cast it on Sprites for example - it also doesn't work if a stack was completely wiped out, Dragons are immune to all magic, Clone spell increases a stack by a few creatures rather than duplicating it, have to garrison some troops at conquered castles or they're taken over again, can mess up casting a bridge spell and then it's wasted),
Some tedious aspects (can only enter a continent/sub area from one direction, some dead ends (mainly in Forestria 2nd continent), the weeks work differently from HoMM in that only the creature mentioned repopulates that week - can make it hard to amass a good stack of a certain creature type, backtracking for creature dwellings (+ memorizing/writing down where they were), traversing the last continent gets tedious at times - seems you're supposed to use a flying army to grab all items and then rebuild your army, )
No surround or positioning (back/side attack) bonuses during combat
Some difficulty spikes (troll and archmage encounters early on), can't occupy any obstacle tiles during combat - means they can only be used to block enemies from surrounding a unit and not to gain a percentage-based defense advantage, no intro and no backstory in-game, pretty basic visuals and sound overall (rough instrumentation, garish colors), encounters and some artifact encounters look like regular chests on the map, can't rename your char, the same tileset is used for all continents, most signs are useless sometimes they'll have funny comments written on them, somewhat overly random difficulty in some ways (can start out with good or bad creature dwellings near the king's castle, can end up not finding the relic for a long time), no sea encounters, the battle theme is kinda lame and there's only one field theme,
​ 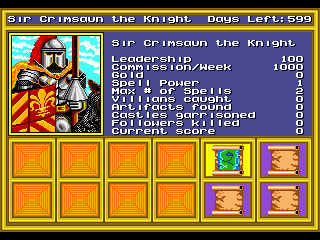 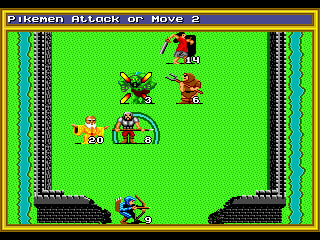 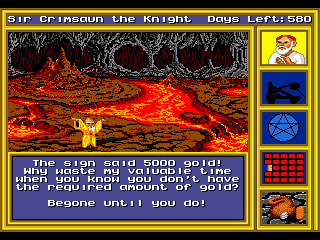 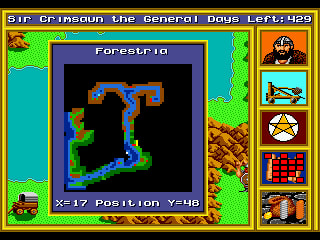 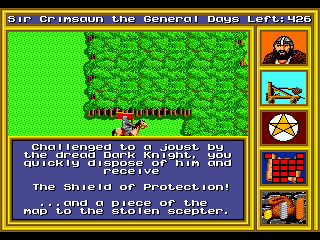 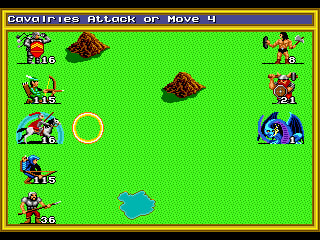