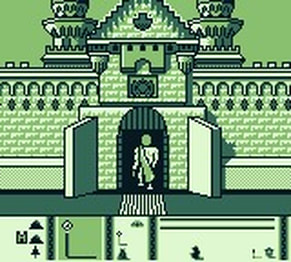 
​+ 2-player vs. and co-op modes, portable RTT gameplay (capture land and castles by moving onto them with one unit at a time and fighting 1 vs 1 battles when encountering enemy units (need to capture surrounding squares to capture a castle), mini-map shows land type and enemy units on adjacent squares, capture all castles or defeat all enemy units to win, ), some advanced gameplay options (world/map size – also affects army size, handicap - affects how much land each player starts with+units' starting HP+eventually army size if you drag the slider far enough), switch between characters on the fly), TD jumping with adjustable jump height, diagonal movement and attacks, stat upgrade items (each unit has seven stats - weapon/projectile speed, movement speed for each terrain type, weapon delay/rate of fire, melee and ranged damage, armor, jump power/length and speed, ), can block projectiles by facing the enemy and standing still, spell inventory, some interesting spells (tome/open book - reverses enemy movement (does seem to have an effect on a CPU player as well), staff/circle of life - homing attack, necklace - revive a dead unit of your choice (you also get to redeploy the unit), ring - invisibility (except when attacking), cloak - auto-hit while standing still) and power ups (scroll - see enemy HP, telescope - see more enemy territory on the map, wings - change direction in mid-air (not flight as the in-game tutorial states)), terrain effects and low+high obstacles (can jump over the lower ones), context sensitive melee attacks, the paladin can block enemy shots with his axe, 7 unit types (some are rather similar though), can regenerate HP by moving up to a friendly castle's entrance

+/- Only one unit can occupy a square at a time (also can't cast spells on other friendly units), good tutorial screens but they should've been accessible during gameplay, negative health power ups (the dark versions) - these can't kill a unit though, units don't drop their items when killed and the winning unit doesn't regain any HP (one or two+ some HP would've made aggressive play more rewarding but too many might've made it too easy to rush), can't escape from an initiated battle, randomized starting spells for each unit, defending gives a bit of a movement speed boost, feather cap deflect shots but they don't hurt the enemy, need to be on the map screen to use a resurrection spell (necklace), can’t recruit more units during a game

- Some delay when jumping and your momentum is disrupted when landing, no campaign mode or random map generator, units sometimes start with 1 or 2 instead of 3 spells, the homing shot sometimes gets confused, some items have the wrong icon attached to them in the manual (staff of true sight=the staff with a circle on top, cap of invulnerability=the feathered cap, circle of life=the necklace), units being able to move through each other makes melee combat pretty flimsy and reduces the importance of jumping in combat