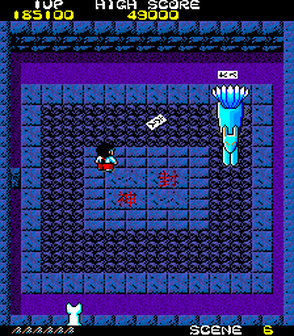 
*with save states at the beginning of levels


+ Some good bosses (fight a doppelganger racoon as the final boss - rocky?), 4 (?) levels of weapon upgrades - not much of a difference to the projectile except for the length and damage, somewhat forgiving hit detection (but not from below), smart bombs and stop watches (both are rare, press both buttons to use), japanese mythology theme, very forgiving checkpoint system, decent art direction, large bosses overall, difficulty options (4 levels, lives per credit (up to 5), coin worth (up to 2 credits per coin, extra life intervals from points (down to 50k, 100k)), some alternate death animations (getting squeezed by snakes for example),

+/- Level timer (a ring of fireballs starts chasing you after a while), some bosses are weaker if you're not upgraded?, need to collect a key to get to the boss of each level (it's out in the open), one hit kills

- Credits options don’t work and you can’t continue at all (there’s a jackpot game that triggers after losing all lives but you’ll very rarely win), hard to recover later on (you'll find one power up after respawning but after that the level goes back to normal and it's not enough), unforgiving hit detection vs. the final boss, repetitive, no strafing/dodging/blocking, no auto-fire, trial & error (hidden items in some of the small lantern statues, final level puzzle - need to hit the statues to find three scrolls or the segments keeps looping, ambush attacks, boss patterns, the "snakes" with a human head that come out of houses), crappy ending, some difficulty spikes (last boss, level 4? segment with a bunch of enemies that cling onto you), somewhat tedious fox boss (interesting idea though), very rare power up containers once you have full weapon power, the melee attack is worse than in Pocky & Rocky (can only hit some enemies, can't deflect shots), some annoying sfx (bouncers, "house snakes"), only a couple of music tracks, crappy ending, easy level 5 boss, you lose all bombs and stop watches from dying and they can’t be used against bosses, the game can't spawn more than one power up so if you find more the previous one disappears