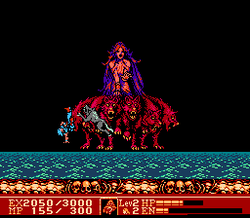 +
Multiple attack combos (new ones are unlocked through picking up EXP after killing an enemy)
light rpg elements (Exp, spells and MP)
nice intro and decent ending cutscene
good variety
good bosses overall
mini-bosses, some alternate paths, a couple of hidden spells, password save, unlockable hard mode, flight spell (very expensive though), it's possible to be more aggressive against some enemies if you have great timing

-
Trial & error (boss patterns, chest monsters, armadillo invincibility time, lifestealing enemy drops, it's possible to slide through the last bosses' lightning spell)
sometimes sloppy hit detection (wolf boss, last boss, gargoyle's lightning shots, some flying bosses when they're close to the edge of the screen)
very uneven difficulty (green wolf and harpy bosses (as well as the second blue gargoyle and even the final boss (trickier to pull off though)) are pretty easy to just spam attacks against (upwards kick), HP drops are random and healing magic expensive, no life refill after boss fights, sometimes you'll face two bosses in a row)
slow walking speed and awkward jump control (height based arc like in Contra, triangle shaped)
you can't consult the (long) moves list in-game (only in the options menu or manual)
​gets very tedious having to pick out one power up from the three that drop when you kill an enemy and then jumping to catch it (need to take it slow and plan ahead to get everything or you'll often be too distracted by the action, fairly easy to miss drops by bosses), some poor AI, vertical levels can't scroll downwards (like in Kid Icarus pits are created as you move upwards), no easy mode or control options, repeats some enemies and bosses, some enemies are barely worth fighting (many HPs, annoying patterns, small reward), some annoying music (high pitched)