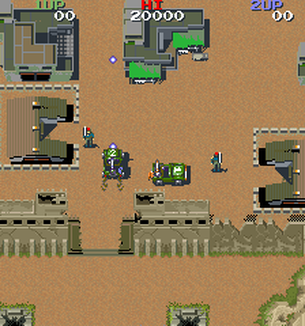 + Fairly open ended gameplay with a long level that scrolls in four directions on the player's own accord, 2-player co-op, pretty fast movement, very little slowdown (unless you let the screen get crowded), upgradeable weapon (4 levels - from grenades>rockets>long range rockets>splash damage rockets>bigger splash), 8-way targeting (secondary weapon only), respawn on the spot (regain up to two hostages, lose only one weapon upgrade), sometimes intense action, level hazards (pillars that fall and roll towards you for example), some destructible background objects, auto-fire (manual fire is a bit faster though), difficulty options (4 levels, lives per credit (up to 7), coin worth (up to 7), point intervals for extra lives (down to 30k/150k)), run over foot soldiers, good background variety,

+/- One hit kills (no HP upgrades or temporary shields), unlimited ammo on both weapons, fairly easy to rack up lives, new enemies spawn from below if you stay in one spot, first weapon can only shoot upwards (lets you strafe - added to the US & World versions) and can't be upgraded?, one big level (with changing music) instead of several smaller ones with bosses on NES?, lone hostages upgrade your weapon while grouped ones don't, no weapon inventory (rate of fire is slower for splash rockets than regular rockets), some delay on the secondary weapon's aiming when turning around, can only have one secondary shot on screen at once per player (including its blast), can't aim while still, can backtrack pretty far,

- No continues even on Easy (unlimited on NES?), loose horizontal and somewhat loose downward scrolling (easy to end up too close to the edge of the screen to react to some hazards), no in-game counter to tell you how many soldiers you've currrently rescued or how many you left behind, low sense of urgency while rescuing people (see Choplifter) except when they go into the chopper and there are occasional bomber plane attacks, somewhat uneven difficulty?, trial & error (exploding vehicle wreckage - can move through a destroyed vehicle if you do it quickly and the flying debris after the wreckage explosion doesn't hurt, faster enemies, boats), so-so use of the YM2151 chip and the music is kind of low volume (pretty cool stereo explosions though), some cheap attacks later on (choppers, last boss can only be hit by a splash damage level weapon), only one boss and it's less interesting than on NES, no cutscenes/stills unlike in the NES version