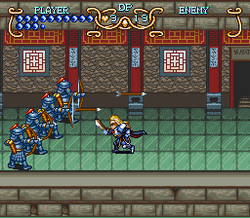 +
Plays like a more arcade-y Zelda (includes a magic flute, running into walls, sandworm boss, a fairy companion (pre-OoT) and spots where you can jump off cliffs)
Narrator’s "voice" (interrupted by any button press)
Decent dialogue overall
Day/night effects
You can run from the get-go
Special attacks and powers (jump attack, telekinetics, shapeshifting, melt to move through floors)
Continues the environmental theme from the prequel
No shops (instead a merchant hidden in a few towns gives you various items and powers in exchange for hidden red jewels – means you can’t hoard items, but also that you have to save up on herbs to make it through the later half of the game or backtrack to save points)
Relatively dark themes like slave labour and suicide
Some good enemy and boss AI
Decent variation, respawn in the same area that you died in, Riverson might be where Seed (FF10) came from, some clever puzzles (pyramid, timing puzzles), some good satirical scenes (Hamlet), some good bosses (some with large sprites), a text box tells you were you are when you enter a new area, somewhat original introductory gameplay,

+/-
No free movement on the world map (see Soul Blazer)
Ancient biotech was used to create demons... and camels
Neil looks just like Cid from FF6
Respawn in the same area that you died in
Whack-a-mole mini-game (it kind of sucks)

-
Minor dialogue bugs/annoyances (easy to skip the end of any dialogue because any button removes it, sometimes shows the wrong character speaking)
Dialogue is sometimes confusing and the exposition is lacking (rushed scenes near the end)
The "get item" text is extremely slow
Some dungeons are too large with many empty rooms (great wall, underwater palace)
Dialogue choices usually don’t matter (you are often forced to repeat the sequence until choosing the right answer)
Hit detection is a bit sloppy (larger sprites, your own sword can hit stuff behind you when you’re controlling Freidan)
Surprisingly dull fishing sequence
Very linear (you sometimes can’t return to a previous location to pick up items)
“You are the chosen one”
Visuals are a bit of a mixed bag (Shadow)
Plot oddities (upon returning to your home town after rescuing the princess you don’t tell anyone about your relatives' kidnapping and the townspeople say the same things as before (same thing with the Incan gold ship after setting sail), nobody talks about the people that turned to stone, Lance doesn’t take your advice about the present to Lilly and then they both run off so you can’t continue the game for a while (wtf!), Will's Father in spirit gathering scene: I need to talk to you (says nothing until you've talked to everyone else)), some plot sequences are rushed (before and in Neil’s house, Incan ship, the Russian gauss player who kills himself, death of Neil’s parents, between the pyramid and the final dungeon), Neil looks just like Cid from FF6, Will’s own thoughts sound like something from Shakespeare (unfitting for a young boy), level up system forces you to defeat all enemies in each room (the enemy radar screen helps), map screen only shows enemy and chest locations, most enemies in Ankor Wat take forever to kill, somewhat poor control options (2 pre-made configs that are both non-optimal), the game doesn’t go back to the main menu after choosing to quit at save spots, backtracking (for health refills, you’re forced to go all the way to the beginning of Ankor Wat after finding the Gorgon flower at the end of the dungeon, sky garden, great wall, mountain temple (mushroom forest)), uneven difficulty curve (three dungeons in a row - sky, palace, mu - then a tough as nails boss battle, Pyramid is easier than the previous dungeon, second Babel Tower boss (bird) is too easy), Ishtar’s riddles are pathetic, some unavoidable hits (pyramid), a boss gauntlet in Babel Tower which includes the mummy queen you just beat in the pyramid before it, pretty lame final boss (looks cool though), repeats music tracks a lot, spinning move takes a longer to pull off than it should (breaks flow) and is a bit hard to control, the towns seem to take up less time and become less interesting the further you play,