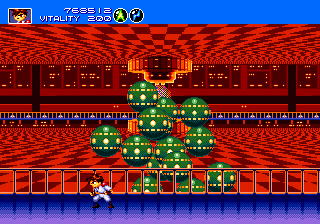 -
Some boring segments (gauntlet-style space port level, board game part can get tedious if you're unlucky, easy shooter level)
the levels are much easier than the bosses
your weapons aren't very visually impressive
somewhat unbalanced weapons (better on Hard or above?)
you can't switch stances on the fly (running while shooting or standing still - you could do this in Contra HC)
​uneven difficulty curve (final level is definitely the hardest though), no sound when hitting bosses (makes the action a bit less impactful), ​most enemies are small and similar looking (see screenshots)