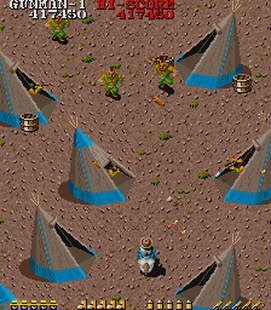 ​
+ Horseback riding (take 2 more hits, do more damage, become a bigger target), strafing, fast paced and intense (scrolls faster than the NES game), decent bosses overall, smart bombs (they detonate as you touch them and they're pretty rare), no need to collect money and pay or find a wanted poster to encounter the boss of a level, weapon (range and power) and speed upgrades, three separate buttons for aiming (diagonal l/r and up), difficulty options (4 levels, coin worth options (up to 6 credits per coin), extra life requirement options (points needed for an extra life)), good enemy variation for the time,

+/- Negative power ups (skulls which lower your gun and movement levels by 1), can't shoot down/backwards or straight to the side (plenty of attacks from below and the sides), lose 1 level of upgrades per life, impossible to get crushed by obstacles? (the character just warps past it), doesn't feature the main theme from the NES version (there are still a couple of memorable tracks though), unlimited ammo, somewhat limited shot range, fairly frequent checkpoints,

- No auto-fire (sore thumb alert!), trial & error (finding the horse and smart bomb, ambush attacks), barrels take too many hits to destroy (several more than on NES unless you're riding a horse) and will damage the horse as well, no alternate weapons and no inventory in this version (no shops either), pretty repetitive (decent variation for the time and genre though, 10 levels instead of 6 on NES), not much of a difference between normal and easy, invisible wall ~25% into the screen from the north, uneven difficulty curve (level 8/natives level is like 150% longer than most of the others?, some later bosses are easy if you just flank them - the dynamite thrower is probably the hardest w/o the horse), it takes 3+ levels to fully power up your weapons and it doesn't make as big a difference as in most other shooters, pretty basic sound considering the chip (YM2204 - used in Ys 1-3 for PC-88 for example), need to input initials before continuing each time you lose a credit, no 2-player co-op, mounting a new horse while riding one visually glitches the game for a bit and doesn't give you an upgrade,