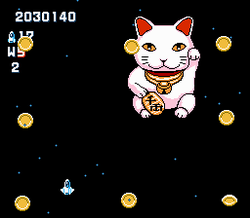 
+
Intense action
good bosses overall
shops before each level (upgrade your weapons and turbo level)
good weapon system (all five weapons are useful in some situation, ship upgrade (take more than one hit before death, increases fire power)
see other Aleste games
four different smart bomb types which are also upgradeable plus one which triggers upon touching it), choose between flicker or slowdown (there’s still some of the other regardless), difficulty options (four modes (different endings)), great art direction and use of colour, comical/silly tone, respawn on the spot (with four of the current type of bombs or the amount you had before death if it’s higher than four) until a credit is used, option to drop bombs on the next areas (lets you pick up more of a chosen type of bomb in that area?), adjustable ship speed (five speeds - press select), surprise gifts after beaten levels (depends on score? – extra bombs, money to bomb converter (every 10$ gives you a bomb, received before the final area or via a cheat)),

+/-
Semi-boss rush in the final area
power ups stay for a while on screen (can be annoying when you don’t want to switch weapons – no inventory, blue power ups (cycling) stay for twice as long as does the ‘explode on touch’-style smart bomb)
unlimited continues?
bomb level downgrades if you change type, hidden level (area 0 – nothing special though you can get some extra cash)
forgiving hit detection when weapon 4 is powered up enough (protects your sides)

-
Some slowdown and flicker
somewhat uneven difficulty curve (easy area 6 and 7 main bosses, dropping bombs at later areas)
F bomb (lol) is a bit worse than the other types
trial & error (when to use what weapon, some boss and enemy patterns)
​one or two annoying sfx