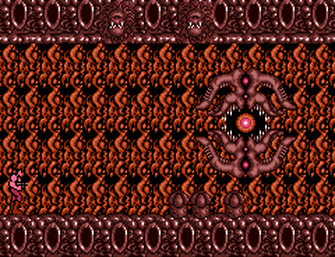 + Adds a lifebar, pretty good variation, longer (four more levels but the hangar zone one is missing here), fast paced and sometimes intense, pretty good bosses overall (some go down too fast), 8-way targeting, some large sprites, respawn on the spot, can select which weapon you want after picking up a weapon power up, adjustable jump height, more arcade accurate z-plane/rail shooter segments (choose your own path - no maps though), auto-fire power up, better final boss,

+/- Not having the right weapon at the right time makes some parts much harder (no weapon inventory), no way to refill life (not even refilled after beating a level), no rapid fire power up, no scrolling and lower intensity overall, can't stand still and shoot diagonally,

- More slowdown, no simultaneous 2-player mode, trial & error (some cheap enemy placements (downward vertical levels), can't jump down at a certain point in the first downward vertical level for seemingly no reason, one of the base bosses dies instantly if you destroy the upper right turret), can't shoot while in mid-air after jumping off screen, no spread shot, easy final boss?, no options (though a hard mode is unlockable?), still somewhat awkward jumping (more vertical than horizontal length) and crouching controls (can't move while crouching, character auto-stands up when pushing forward), a bit hard to judge distances in the 3D levels (on bullets especially) but they're easier here, unbalanced weapons (laser and fire are not as good as the machine gun though laser is at least somewhat better than in the NES game), no laser of fire weapon until the third level, can't jump while in water, this version is missing the cutscenes seen in the JP NES version, worse color choices overall with overly samey backgrounds compare to the NES version (some background tile and sprite work is a bit worse as well), repeats some bosses,