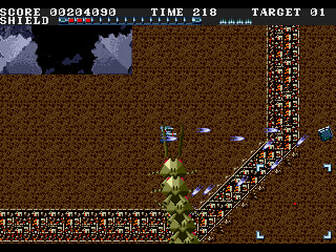 ​+ Strafing (hold B, can also lok the tank into strafe mode by changing the controls in the options), decent mini-map system (shows important targets and your position but not level topography and regular enemies or hazards), pretty large and multi-jointed bosses, some cool settings (giant airship in lvl 2), weak and strong attack (the strong one also causes recoil which makes it feel stronger), fairly impressive music at times (could've sounded closer to the X68K ver. though), gun drone which works like a shield and can be made to spin and shoot in eight directions by hitting it with a strong shot/the blaster (lvl 1 and 6), difficulty options (easy (default)-hard, 0-6 lives per credit), the bosses tend to come after you instead of you coming to their lair/hideout and the whole level becomes the battle arena, auto-fire, 16-way aiming and movement (however you can't hold the d-pad in 22.5 degree angles without holding the strafe button so it's more like 8-way+), homing missile sub weapon (can carry up to four of these), some interesting enemy design (the second boss can't be damaged unless you stop shooting - making it exposive its weak point, the lvl 8 centipede boss and the hazards that push you towards pits in lvl 9 are similar to Zelda 3), R-type like gun drone in the fourth level (acts a shield and a boomerang of sorts), spinning shield/homing projectile power up (lvl 5 only?, for some reason it only spins while shooting), some good enemy AI (the circle strafing tanks in lvl 5), some good bosses, mini-bosses in the final level

+/- Maze-like level design, the gun drone can be destroyed, respawn on the spot without losing the gun drone or the sub weapons, level timers (pretty long though), no health drops, odd water physics (can use the tank as a boat for a bit in lvl 5),

- Sub weapons and gun drones are lost in-between levels and you can only find most of them in one level of the game, Trial & error (sometimes a bit hard to tell if you're damaging a boss or not, shots from off screen - especially annoying in lvl 6, fast hazards like the steamrollers in lvl 1 which can't be seen on the map in advance, mines never stop exploding when shot), unavoidable hits in some narrow paths and aginst the lvl 6 boss?, no main weapon upgrades?, the gun drone can get stuck on walls, somewhat slow turning (can be a problem in narrow areas), kinda generic art direction and bland colors overall, some slowdown, some dead space (no speed upgrades), stiff movement around walls (touching a wall just a little bit makes the tank stop moving), somewhat tedious arkanoid-inspired fourth lvl boss, no health refill after bosses, limited continues (only 3 on easy), kinda lame ending (no differece on Normal or Hard, can make the hero trip by holding A though which is pretty funny),