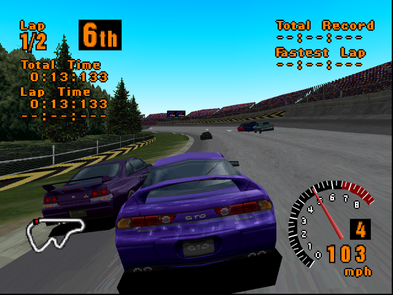 +/-
The drifting physics take some getting used to and are rather picky compared to previous arcade-style racing games
up to 6 cars in a race (40 in Daytona USA and 15 in Sega Rally)
need to read the manual for explanations of some terms and car settings mechanics
no car damage
few courses in which you can jump (without a light and super fast car) and no over the top course designs
no commentator, two arcade mode exclusive cars (1967 Chevrolet Corvette and 1998 Mazda Roadster), your garage can hold up to 100 cars, shops change their stocks a bit every tenth day, can't use the CRX or Eunos Roadster in the lightweight challenge, "lifetime supply" for parts (if you sold an old car and bought it again you'll still have the parts) - works only for parts that are actually added to the car (not weight reductions or port polishing), some rubber banding, the "normal car" cup gives a lot more money than most other cups,

-
Somewhat over-sensitive controls (pretty easy to skid and end up going the wrong way accidentally)
some pop-up
need to go back to the main menu to change camera angle and sound options (should've been accessible during a race)
no course maps when taking licenses and no tutorial videos
~6 second delay after every race
​no rumble feature, no animated spectators, no rain effect, no free camera mode in the garage, sometimes uneven difficulty during the license tests (middle of A-license and second night time level for the international license for example), many cars have slightly different HP values in the shop and in your garage, turbo lag isn't explained in-game nor in the manual? (see gamefaqs), the physics when bumping into other cars are a bit lacking, easier to win a race than to qualify for first place, the difficulty balancing is a bit rough (some of the more expensive cars like the Cerbera need some tuning to be on par with a cheaper car with some tuning (mainly tires and breaks)), minor interface issues (yes/no prompts sometimes default to no and the menus after a race default to replay, have to check each sub menu in a tuning shop to see what you already have), can't sell parts, no skid marks, some trial & error (race modification effects)