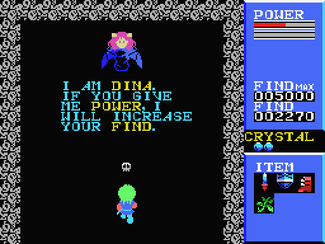 
​
+
Movement speed upgrade via the first boots
Nice assortment of equipment (lifebar and wallet upgrades, herb that triggers when near death)
Large world for the time
Mixes overhead adventuring with autoscrolling action and platforming
Decent ending cutscene
Mini-bosses
Password save (fairly long)
Good sound effects
A new music track starts whenever you buy new equipment
Each boss has its own theme
Can trade HP for money with a vampire NPC (though it's a pretty bad deal), can deflect some projectiles with your sword, some items are cheaper,

+/-
Different level and world layouts compared to the SMS game (harder first dungeon but easier first boss, harder beginning, the overworld is a bit more open ended after the first couple of dungeons but the gating with tougher enemies is harsh so you need to find the pendant quickly to be able to explore more freely - you also need to beat dungeon 5 to get the aqua boots)
No knockback when hit in the top down segments
You don't have to pause/enter a shop to see how much gold you're carrying
Can stand on enemy spawning points as they appear to cancel their spawning
Safe spots on some screens
Three different dungeon mini-bosses in this version (pretty weak though)
Static difficulty
Some hidden health in the sidescrolling segments (no visual clue though)
Nothing more expensive to spend money on after the level 3 sword (30k, maximum wallet is 50k)

-
No shopkeepers in shops (empty Zelda 1 style rooms with an item and its price in them, other NPC encounters also look like in Zelda 1 rather than Ys 1)
Have to find and buy the first boots (important because in this version you easily get pinned down by even the first enemies you face in the overworld and hit repeatedly until death until you have the boots and can move away - you are told to find the boots early on but that NPC is located beyond the first dungeon)
Some control issues (up to jump and auto-fire jumping, kinda slow dialogue text (can't be sped up here), you can't move backwards in the platform segments (you can't even turn around!) and you get kicked out if you touch the edge of the screen, pretty short invincibility time and you can't attack for a short time after taking a hit, some delay when starting to move in the sidescrolling segments, set jump height)
Simplistic dialogue lacking most of the charm of the SMS game
Grinding for gold - you have to buy even the crystals (expensive too)
Mostly easy bosses (they're also simpler than on SMS overall)
No second quest
A bit repetitive (color swaps later on)
Only one main weapon
Health is cheap while other items are very expensive
No alternate attacks or secondary weapons, some bosses are just button mashers, some enemies are way too maneuverable for Kelesis, very slow sideways and backwards movement during autoscrolling sections, not very satisfying to hit bosses (no flash or animation) but you do flash when hit here, somewhat choppy scrolling, no in-game overworld map, worse spritework and color choices, slower rate of fire in the sidescrolling segments here, no mini-boss in the first dungeon here, some backtracking and some empty caves, no boss at the end of "another cave" in the north and it's also quite long, two password givers near each other in the north, some hints are too obvious (riddles would've been more interesting), some dungeons are shorter?, worse fourth boss and its theme is an area theme in the SMS game which doesn't quite fit a boss fight, you can get the strongest sword too early here, missing a few enemy types (mole, fly, flea, death lord, vortex, tick, spider?, shark fin), less visual variety, missing some items (ascent boots, magic mirror, wise women's rings - item quest to get more hints, purple/red herb), no intro cutscene
​