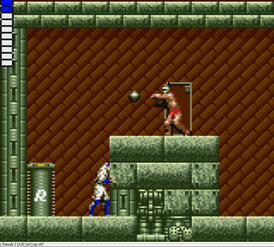 
+
Pretty good variation
MM-style mechanics (choose your path through the first four levels, rescue four playable ninjas with different abilites (that you can switch between on the fly) by beating bosses - climb on ceilings/bombs, walk on water/large boomerang shuriken, grapple hook, somersault/shuriken)
Upgradeable life bar
Each character has its own spell/technique (somewhat different here: red=teleport to beginning of level, pink=freeze?/light up/lower water, yellow=shield, blue=tornado transformation, green=smart bomb)
Good bosses overall (easier regular bosses than in the prequel overall)
Good mid-air control
More large and detailed sprites
Bumping into enemies generally doesn’t hurt you (GG Shinobi 1)
Improved spritework (some still look a bit generic)
Can now attack upwards with the yellow ninja
Password save
Can replay beaten levels (you need to find a hidden crystal in each level to reach the final one here - collectathon element)
Some innovative level design (the room with red acid drops (which can be destroyed), the part with black steel balls rolling downwards that you can affect the momentum of by hitting them, using the pink ninja in a room with moving plattforms and one with two paths of disappear/reappearing platforms)
The abilites are used a bit more in the regular levels

-
​Slow horizontal movement with vertical-based jumps (see RoS, Contra etc.)
Trial & error (off screen shots in one level, figuring out the smoothest order of levels to take through the game, some very tight jumps (especially with the grapple hook though you can skip most by using the tornado), cheap enemy placements and attacks here and there (fewer than in the prequel though), still can't look up/down, boss patterns)
Still doesn't show bosses health bars
No options menu
First ninja doesn't have a ranged attack (shuriken) or somersault - feels like padding to not have basic abilites from previous games (similar to MMX)
Sometimes uneven difficulty (several difficulty spikes in the final level, pretty easy armadillo boss when using yellow)
You'll probably repeat some parts at least once in the final level to beat it and there's some backtracking in the regular levels (you'll also have to repeat some levels even if you know the best order)
Pretty bland ending again
Forced collecting of the crystals to beat the game
Missing some of the better enemies from the prequel
Somewhat tedious factory level (easy to fall down and have to repeat large parts of the level)