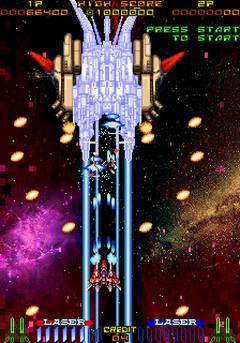 
​
​+
Saturn and arcade/tate modes (the latter is harder)
Lots of neat effects (entering the atmosphere, the earthquake, semi-3D stuff, scaling and multiple layers, final boss)
Pretty fast and intense
Many levels of upgrades on the main gun
2-player co-op
Air-to-ground homing laser attack (use a cross-hair to lock onto enemies, combos give better scores), difficulty options (4 levels of hard mode!), hilariously pretentious stage subtitles, great bosses overall (they switch up their attacks after enough damage), you can switch off the GUI (and you will since it hovers above the playfield), mini-bosses, some innovative level design (stage 6), transparency effects, respawn on the spot (even after using continues, you lose one level of laser and shot power per death which is pretty forgiving),

+/-
Some short levels
Power ups bounce around and off screen pretty quickly
Rank system (meaning the game becomes increasingly harder if you manage to not lose a life for long enough)
Limited continues
No smart bombs
mini-bosses fly away if you don't kill them fast enough, Saturn mode is less intense at times because enemies in front of you that are off screen can't fire at you

-
No alternate weapons
Gets very hard if you die later on
Can't upgrade speed (the ship is a tad slow and since there are no smart bombs, it forces more memorization)
Uneven difficulty (stage 5 boss, stage 6 final part)
Some cheap unsignaled attacks
Some slowdown later on, tacky looking menus, ground targeting system is a bit too rigid (can't target an enemy if you're too close to it), no sound test,


Notes:
-To start the game with 8 credits instead of the usual 4, on the title screen hold L+R+Left+C on the control pad, and press start.
-7 (fairly long) stages