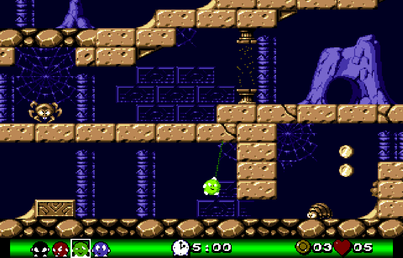 
​+ Physics-based platforming puzzles (pretty advanced bouncing and swinging, water and sand level manipulation, block pulling, teleport blocks by pushing them into teleporters, melt ice blocks by setting logs on fire or lighting torches near them, air blowing you upwards in some parts - Turrican 2 or Sonic 2?), switch between different characters on the fly (charge shot (destroys some blocks and lights torches+wood), digging/block destroying, hookshot swinging and pulling, swimming and shooting; the game selects which ones you start with for each level but you can sometimes gain another one by moving through a portal), pretty expressive sprites, animated hub map screen, pretty nice intro and cutscenes between worlds and levels (some animations but mostly full screen artwork stills), no forced collecting unlike in Pac in Time (SNES) and the view is more zoomed out, four save slots (the game auto-saves after every fifth level), particle effects, rounded slopes (Sonic), some hidden bonus levels (timed coin collecting), pretty good variation, impressive music (especially on Amiga), pretty long (~2h30m), pretty nice build-up to the final boss, interactive epilogue area (Toejam & Earl),

+/- Small sprites, one hit deaths (and you can't keep playing with the other character(s) if one dies, Pac in Time adds a healthbar), no shops, can't jump while charging, level timers, linear structure,

- Some control issues (stopping your bounce to a standstill takes a bit too long, up to jump/bounce and if you don't hold the button before moving sideways you lose a lot of upward momentum, can shoot but not swim diagonally as the blue furry and swimming is kinda slow as well - faster in Pac in Time, need to stand still on the ground to be able to switch characters), some trial & error (can stand on some enemies later on, sometimes hard to tell what will damage you, some cheap enemy and hazard placement, Esc=suicide), no save/load access from in-game, fairly long screen transitions after losing a life, can't have sfx and music at the same time (can on Amiga), no difficulty options?, no checkpoints?, some tedious jumping and block pushing/pulling segments, minor slowdown (smoother than on Amiga), no mod music option?,

Notes:
-Intro is in a separate program file for this version