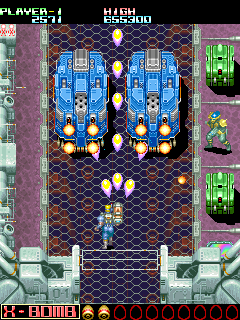 +
3-player co-op
8 different characters (different weapons and endings)
Adds a couple of shoot 'em up segments (these are pretty cool in that you're riding a hoverbike and can tackle enemies - also if you lose a life the bike crashes into any enemy above your avatar, sadly they are rather short)
Many large and detailed sprites (several mini-boss like enemies in each level)
Upgradeable weapons (three levels? - pretty strong at full power but not Fire Shark strong)
Fast paced overall, some cool weapons like the ricocheting projectile for the robot (the sci-fi morning star weapon returns but it's worse here), strafing via one of the weapons for each char (it still locks your aiming to upwards though like in Jackal), difficulty options (4 levels - more numerous and more aggressive enemies on Hard and above, coin worth, lives per credit (up to 5), point intervals for extra lives (down to each 300k)), temporary shield power up (+1 HP), decent intro cutscene (skippable), smart bombs (can hold up to 10) - these only hit enemies and projectiles above your avatar though, auto-fire (semi or full can be set in the options - F2), makes good use of the environments for its level designs (bridges, twisting corridors, moving and re-appearing platforms, extending laser trap enemies), very good enemy variation, very good art direction (the contrast is a bit low in parts though), some nice visual touches like the trees in level 4 and most explosions, partially destructible environment, some good bosses (most of them go down rather quickly when upgraded), some bosses have several destructible parts, some hidden items?, some alternate paths through some levels, little to no slowdown in 1-player (some in 2- & 3-player modes though), pretty nice intro cutscene,

+/-
No fuel/energy mechanic here (needed to collect energy tanks to stay alive similar to Wonder Boy in the prequel; probably there to keep you from playing too safely)
Die in one hit
No run or dodge moves
Can't move backwards in a level (can miss some power ups)
Respawn on the spot (lose all weapon and speed upgrades and all but three smart bombs but you regain one weapon upgrade and auto-use a free smart bomb when respawning)
No longer has connected levels (you'd manually walk into the next level after the level results screeen in the prequel), no Zero wing/Truxton/Flying Shark cameos here?, no optional escort mission of the company mascot hidden in the first level (for 40k points)?, more technically advanced OST but it's less memorable and the sample quality is so-so overall, you can occasionally make enemies not shoot back by not letting them fully enter the screen here as well, time limit on levels (starts if you stand still too much, not too bad on Normal and Hard), can switch character after using a credit, easier default/Normal than in Out Zone (relatively easy for the genre - Hard mode is quite a bit harder than Normal though), basic hidden rank system (enemy projectiles become very fast if you don't die for several levels), can't jump, optional invincible mode/god mode,

-
Speed upgrade power ups (no manual speed control) - default is too slow later on and for harder difficulties
Can't switch back to the temporary special weapon if you step on a weapon switching pad
No weapon inventory (have to step on switching pads placed in the levels and each char can only switch between 3 weapons including the temporary special weapon - not very flexible)
Trial & error (which weapon to use in which situation, most boss patterns, some missable power ups)
Fairly hard to recover later on (moreso on Hard and above)
Uneven difficulty curve (pretty easy level 4 and 5 bosses, easy level 6/final boss) - same on Hard, can't stand still and aim, repeats most level design ideas from the prequel and doesn't add that many new things, some chars have the same special weapon, some crappy chars? (seems balanced for co-op),

​
Notes:
-Vertical scrolling top down run 'n gun gameplay
-Sequel to Out Zone/OutZone
-Have to turn on invincible mode/god mode to see the game's intro cutscene
​