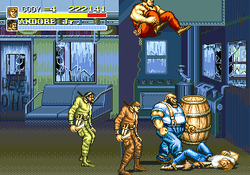 -
Hit detection is pretty off at times (bosses can grab you from a couple of "meters" distance)
some trial & error (enemies falling down from above, bosses that neglect your attacks to do theirs seconds before they actually do the attack)
cheap hits (you often get hit just as you're getting up or when lying down (Abebe, the dynamite chuckers)
​second bonus level is really lame
some scratchy voices
some thugs look like marionettes (anatomic-wise), repetitive (there are like 6 different enemies in the game), can't throw away pipes and swords, could've used more colours (the MD was capable), minor flicker with a lot of action on screen