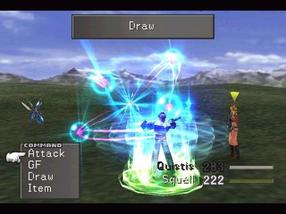 
​
+
Somewhat comical (Trepies, Fujin, various NPCs, Rinoa's Limit Break, Quistis learns hers by eating weird items (Mystery Fluid, Black Holes etc.))
Junction system (Train GF (summons) through battle and use them for character upgrades) is fairly deep and addicting even if it has major balancing issues
Play as a mercenary/student doing tests and missions
Timing attacks added to battles (see Mario RPG and to some extent FF6-7)
Some memorable characters (Fujin, Edea)
In-game manual
Use the enemy's magic against it (Draw)
Mostly fun action sequences (train hijacking mission, escape from Dollet, Lunatic Pandora attack, flying soldier duel)
New status effects (Zombie, Meltdown), GF abilities (Call Shop, Refinement)
Some interesting storytelling techniques (characters thoughts are shown in-between dialogue (too bad they usually aren't thinking anything worth reading)
Improved animation and sound quality, eEnemies level up and gain new spells when you do (makes it worthwhile to return to some areas), optional bosses (though only two of them are at all challenging), exposition through playable dream sequences where you see past happenings through the eyes of others (in a nod to old school FF fans these take on a more cartoony and lighthearted approach), later events are hinted at for those who explore everything), sidequests and mini-games (CC Group card tournament, Winhill ghost, Shumi Village, Odin's Tower etc. - Fewer than in FF7 and most of them aren't very exciting), drive cars on world map from the get go, final boss has five phases (too bad it's still a pushover unless you rush through the game), hidden items, some memorable locations (Esthar, Space Station, Centra Ruins, DSR center), some decent puzzles (Ultimecia castle, Deep Sea Research center top floor), nice transitions between game engine and FMV in some scenes, dialogue choices matter at some points (missile base mission)

+/-
No change position commands?
Equipment is replaced by weapon upgrades only (done by collecting items from beaten enemies - you don't know which enemy carries what and the process is often tedious and without challenge; add to this that the upgrades barely make a difference for any character but Squall and you're left with a marginalized and uninviting system)
Money is gained automatically in intervals (the way it works, money is only an issue early game)
Cards and items can be turned into magic (easy to overpower yourself without grinding once you know who has what and how refining works)
Can't re-junction during battle (makes for poor flexibility - you're forced to reload/escape to be able to adapt to elemental and stat effects)
​Limited ability slots on GFs (22 max, need an item called Amnesia Grass to remove abilites)
​Most GFs and spells become useless in the late game
Some of the better cards are created by losing certain rare cards (in the end it doesn't matter if you complete the CC group quest but then again you don't really need the items you can get when you're at Disc 4)
Usually can't walk around while in dialogue (Chrono Trigger, FF8 does it in a couple scenes but why not in more?)
Random encounters throughout most of the game (remember Chrono Trigger and Mario RPG?)
Limited spell inventory (can discard spells though by pressing Square), Draw command can fail (determined by stats, also makes drawing a full stock for all characters less efficient)

-
Slow transitions between screens
The Draw system is cumbersome because it makes you not want to use spells (partly in case there won't be a way to draw more of them further on (you'll want to keep as many as possible to boost your stats and for refinement into better spells), partly because stats and physical attacks are more important than magic) and because characters can't draw spells for each other (so if one character already maxed out a spell it is forced to wait for the others)
If a monster you're drawing from dies you can't redirect the draw (the turn is lost, FF1 style!)
The game is really vague about some things (Treatment/Remedy, how Amnesia Greens affect if a GF gains new abilites to learn or not, Luck stat, Double magic, memory loss from GF info, Garden history, Ellone until disc 3, history on sorceresses, Return Damage ability)
Plenty of dead space
No location cursor (showing where your character and exits are located in town/dungeon areas, annoying due to some odd camera angle choices)
Very little interaction with background objects (some NPCs can't be talked to, no chests containing items, several parts where the environment is just a nice backdrop with a narrow path to follow)
Can't skip summon/magic animations
GF ability points don't carry over if you gain surplus points from a battle (so the points are wasted if you're not careful)
overpowered abilities/spells and items (kamikaze, revive ability, aura, hero/holy war items, some limit breaks, meltdown), useless or soon to be obsolete items and abilites/spells (most GFs, return damage ability, cover, med data, mad rush, absorb, alert, rename card, expendx2-1, potions, auto-potion, enc-half, mid mag-RF, doom, 'X'+10-40%/Def-X1/2 (why not have them replaced automatically?), Quistis' early limit breaks, Rinoa's angel wing limit break), ​Seifer doesn't participate in the comm tower battle (?), some trial & error (DSR center top floor, final boss picks three random characters to face while the others do.. what?, elemental and status affinities, Omega weapon), Angelo search is tedious to use and not really worth it (do nothing for several minutes during battle to find random items), no AP gained from petrified enemies, (...) - Squall's thoughts, some awkward scenes (What's with the calm music during Esthar jailbreak?, same with Eyes on Me playing while Esthar demands Rinoa arrested, Irvine when initiating the Garden vs Garden battle, the disparity between FMV (hectic and crowded) and in-game (calm and empty) during the Garden battle, NORG tells you his weakness in battle, some missable items (Diablos, drawable GFs during boss battles, Timber magazine #12) and dialogue, Obel lake quest (tedious and not very rewarding), plenty of scenes where you need to talk to a specific character/wait/try to exit the screen to further the story (and you're forced into walk mode for some reason) - what is the point?, card game annoyances ('thinking' CPU in card games, finding someone who plays the cards you want (and often having to play them over and over before it shows up), the Random rule (annoying because of lack of card shop for selling what you don't want), finding the queen of cards), draw points are often useless (because of the card mod/refining mechanics), somewhat blurry pre-rendered backgrounds (in contrast to the sharp, low-res 3D models), camera rotation on the world map is way too slow, Chocobo mini-game is tedious and pointless (you don't need Chocobos in this game), you'll need a guide to efficiently keep track of refinements, all your junctions are removed in a couple of the dream sequences,

Possible translation misses: "Are you MAD!?" - Squall walks out and back then Quistis acts like nothing happened while everyone else disappears, "Here's a gift, but you have to work for it" - Shumi village, 'What's up? 'Yeah.' - Squall and Rinoa in Fisherman's Horizon, "-Seifer is alive! -What does it all mean?" - Squall and Rinoa at D1 end, scene in Balamb after fighting Raijin and Fujin (why let them go, let alone survive?),

Plot inconsistencies/devices (the memory loss plot twist (Irvine should've said something earlier or at least been rewritten to not have known), Quistis getting locked in (either an intentional joke or just really dumb), why does Seifer and friends keep surviving?, how can the robot boss in the Lunatic Pandora push the party out at one point but then be approachable later on?, Rinoa is helpless yet again at the end of Disc 3 despite fighting alongside the party for most of the game, Esthar has space ship technology but doesn't interfere with the story at all, why don't Odine/Laguna (who doesn't introduce himself when you enter Esthar because.. well, why?) keep Rinoa from going to Adel's prison or reveal that she's a sorceress? Why no safety precautions from Lunatic Pandora or the Lunar Cry?, How did Ellone get captured by Galbadia when she landed in the pod with Irvine?, the story about how Adel was trapped is ridiculous, How'd Edea end up with the party pre-Esthar and why doesn't anyone object? (and how'd the others get ahead on the railroad track when Squall snuck out before them?), even when choosing 'prepare to attack' as your first order during the Garden battle Squall will think to himself that you didn't, Money can be transferred globally but you can't text message each other?, Ultimecia not realizing Ellone could be in a Garden before firing missiles at them, Ultimecia can teleport and mind control an entire city but not kill the party?, the Lunar Cry (you don't know anything about it until half the game has passed), where is Cid during the Trabia/Lighthouse events?, After fighting Raijin and Fujin in Balamb everyone seems to forget that Galbadia Garden is right outside the town, Rinoa/Irvine knew about the missiles yet didn't tell the party until it was too late, try sidetracking to back to Deling City when doing the Missile Base mission, 'So that's why G-Garden wants her taken out' (during Assassination mission) - We already knew that Squall!, pretty much the entire assassination sequence (sneaking in the middle of the street during the parade, no sense of urgency or threat, Edea speaking of sacrifice after Sacrificing Deli President, Squall being passive when Rinoa gets attacked, sewer dungeon not mentioned by the general, Rinoa barely reacting to Seifer being alive ('what does it mean?'), etc.), 'we entrust world peace and the future to..' a bunch of rookies on their second real mission, Fujin and Raijin at Galbadia - why did Cid send those guys and why are they not telling you their message when they were supposed to meet you in Timber?, a parked van blocks train access to Galbadia Garden - Driver says 'I'm busy' when approached, TV station broadcast looks awfully clear considering the radio wave disruptions from Adel's tomb, what's with Quistis running after Rinoa following the TV station scene in Timber - why the minimal exposition and where did the president go?, not to mention the stupidity of Zell and Galbadia withdrawing 10 minutes afterwards, Ellone (why doesn't she tell you she's in Esthar and not on the ship?, can't ask the Garden doctor/anyone else about her in the beginning, she decides to communicate to you through weird flashback dreams instead of speaking after you've saved her form monsters in the training center, Selphie goes by herself to get your party at the comm tower, Biggs uses a radio transmitter to activate the spider robot - radio communication is disrupted worldwide), you've just read about the garden festival not happening in the computer terminal yet Squall doesn't mention it to Selphie),


Bug: After visiting the SeeD ship go visit Rinoa in the Garden (I was on the Balamb continent) and you'll be teleported to FH where Squall starts walking to Esthar