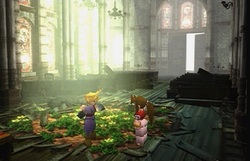 
+
Lots to see and do (mini-games, sidequests, collectables, tons of secret items and quite a few sidequests)
Customizable characters (there's some strategy involved in picking the right materia/equipment for every situation)
Good dialogue overall (some translation misses)
Battle arena
Mixes action sequences into the gameplay (barrel sequence with Aeris, etc.)
Dialogue during battle adds excitement (Junon, Icicle Inn, Midgar, Nibelheim mountains, City of the Ancients; FF4?)
Memorable characters and locations
Improved dramaturgy and cinematics (the 3D models add a lot of expressions compared to the 2D games)
Fun mini-games/action sequences overall (not including the boxing or feeding games, the sub marine sequence/game is slow and easy, the Junon parade stuff is pretty trial & error as well)
Excellent art direction overall
Limit break system (take damage to achieve a special attack that gets better the more you use it), good animation overall (spells, cutscenes), great cutscenes (most of which are blended really well with gameplay graphics), very customizable characters with the materia system, lots of config options (battle speed, message speed etc.), having to split up your party offers some strategic depth (except on a few occasions where the game doesn't let you switch equipment and materia), optional bosses and areas (providing some extra challenge), enemy away materia (avoid random battles), the pause menu shows location names, some meaningful dialogue choices (dating, some item rewards), some good puzzles (shinra building floor 62, ), some innovative storytelling techniques (the interactive flashback segment where you also play alongside the main villain, cloud's mind as an interactive area),

+/-
Pretty linear (can't go back into church for the Turks or leave Jessie behind in the first reactor, can't go back down in Shinra HQ etc.),
Being able to customize each character so much makes them seem a bit anonymous (in battle - however their limit breaks and stats set them apart and the flexibility gives more agency to the player)
You only get one shot at some items (Peace Ring and others at Fort Condor, a couple of Enemy Skills, Ramuh)
The super deformed character models are primitive even for the time (but have an oregami-like charm to them)

-
Too easy overall (you can resort to leveling up a bit or using overpowered abilites instead of strategy)
Somewhat clunky strategy mini-game interface and poor tutorial for it (also easily exploitable by deploying after the battle starts, the funding mechanics are also off - if you donate 4000 he still wants more but you can play if you don't donate at all)
Tricky to get final limit for Aeris and you barely get to use it
The submarine chase sequence is way too easy
Sometimes hard to tell if a background object is interactive
Some odd/lame plot devices (No other major city or faction apart from Shinra, Shinra got away with burning down entire towns, the party lets Aeris go by herself to face Sephiroth and they keep trusting Cloud after him beating her up, ​Rufus goes to Rocket Town to borrow a PLANE?, Scarlet goes by herself to search for huge materia, party is captured by the Turks in the Shinra building elevator?, villains staying around to explain what they're up to while the heroes do nothing, Rufus and Heidegger are on the same boat and don't take matters in their own hands when you're battling soldiers and Jenova?, Aeris not being caught when the Turks knew where her home was all along for all that time, Sephiroth just waiting around in the volcano, etc.)
Since the camera changes angle in between screens you can sometimes get lost (usually solved by pressing select but in some areas it doesn't work) or accidentally go the wrong way
Random encounters (Chrono Trigger and Mario RPG say hi) - fairly frequent as well and while there's a materia that lowers the encounter rate you get it pretty late and you can't stop them completely
Plot holes (Avalanche don't bother to check who Cloud is? Jesse doesn't know he's in Soldier; Shinra burns down Barett's, Cloud's and Tifa's home towns - then lets them move to their capital city)
Somewhat blurry backgrounds and full screen dithering
Some framerate problems during battle, chocobo breeding takes too long (you can get a Gold one by beating Ruby Weapon), unbalanced characters + spells and attacks (some useless items and spells, Aeriths final limit & weapon are available too late), some scenes that would've benefited from more detailed graphics are too zoomed out (like when Cloud is dressing up, or in Cosmo canyon), some goofy-looking animations, using Steal frequently and learning enemy skills as soon as possible seriosuly lowers difficulty, Fort Condor reward messages are sometimes incorrect, Cloud is a slow climber, can't select targets for your next action while some battle animations are playing (such as limit breaks and summons), final boss is a pushover if you don't face it right away and try not to level up throughout the game (skipping optional bosses and areas), some annoying sfx (which are also too loud compared to the music), sometimes the music doesn't fit what's happening on screen (calm music during a hectic sequence or the opposite during an emotional scene), some shallow or underdeveloped characters, unskippable cutscenes (can't skip summoning cutscenes either), ​often slow animations and transitions, can't pick the target for Tifa's limit break, can't switch materia positions on a character's equipment without removing the materia, sometimes poor animation during dialogue scenes, often unintuitive pointer controls in-battle (better with non-fixed camera?), can't use a magic tied to an all materia on a single target in battle (works outside of battle with for example Cure), trial & error (barrels, wall market), characters don't remember which enemy you last targeted with them nor do they remember commands between battles, poor success rate for stealing even in the hard type mod (it sometimes won't work for 7-10 turns in a row), can't see how many charges are left on the All materia, enemy lure isn't efficient enough, no journal/log feature


A few glitches - Vagyrisk claws become more difficuly to steal as you increase in level (and they're at 4.25% chance when at lvl 11 - not a major item though), cover skill blocks elixirs, one of the female cloth items for Cloud don't count towards judging if Don picks him