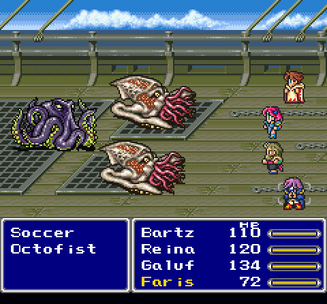 
​
+
Job system (customize and multi class your chars, switch jobs on the fly, control what abilites to gain) - more advanced than in FF3
Better spell system (you have control over what to use)
Improved interface (battle gauge, no inventory limit, memory cursor, sorting, optimize equipment - still could be faster using l/r buttons)
Improved formation system
Somewhat open structure (sidetracking for summons etc.)
Better dungeons (new hazards, better variation, escape sequence, some decent puzzles and action sequences in dungeons)
Some new spells/abilities (reset, demi, gil toss, magnet, dynamo, combine)
Some creative enemy designs (Atmos), Gilgamesh, telepathic Moogles, the Golem encounter, exit dungeon spell (you get it pretty late though)
Spells are no longer wasted if the target ally dies before being hit by them (thrown on caster instead)
Hidden items
Improved sound quality and colour palette, the black chocobo no longer has to return home after one trip, nice cutscenes, interplanetary travel by comet, pilot a submarine, faux ending, some enemies move on the overhead map and can be avoided, a proper world map (need to use the one outside the game to check location names though), parallel worlds merging into one, more expressive character sprites

+/-
Run outside battle by pressing B (requires thief job and learned ability, need to use up an ability slot for it to work when changing jobs)
Need to grind to afford all equipment/spells in a new town
Some seriously overpowered skills (gil toss, sshot/rapid fire and throw)
Inflexible ability system (one slot is always set (Kick for Monk... ugh))
Low success rate on steal
Can't unlearn spells (conjure)
Beaten characters stay dead after battle

-
​Sketchy dialogue and overall plot (more crystals and chosen heroes, super advanced ancient technology... zzz)
Can't re-enter the pirate base from where you exited
Trial & error (instant death attacks in crescent isle tower (split party), dungeon where the first Elf Cape is, can't see the "ability tree" on jobs for planning ahead)
Some near useless spells and abilities (venom)
Some NPCs say the exact same thing (and it usually isn't interesting)
Frequent random encounters
Takes hours to introduce an antagonist
Some classes have overly circumstantial uses (geomancer) or are more trouble than they're worth (catcher, blue mage)
Some tedious segments (outside pyramid, floor traps, lava cave)
Some dead space
No standard chocobo forests?, Butz says goodbye to Boco (the chocobo) quite far into the game but it hadn't been involved in the story since the beginning scenes (there's a better scene later on where Cara talks to it though), odd choice of music for a couple scenes (water crystal tower, finding the airship), if the flying city carrying the earth crystal landed recently in the western ruins (like Cid says) it should've shown on the world map (also where does it fly when the party discovers it?), plot oddities and devices (Lenna's mother?, the nanny doesn't recognize Faris/Sarisa?, at Galuf's castle after getting the plant (you get in via the moat, which is bad in itself, then you can open the front gate without anyone reacting even though there's supposedly a swarm of monsters..., undisruptable dance party after the first battle with ExDeath, Bahamut awakening scene (how can the party see any of that?)), no new spells to buy for about three towns in ExDeath's world, uneven difficulty (multiple attacks per turn from some enemies, Shinryu and Omega (unexpected encounters)), some interface annoyances (can't see equipment bonuses when it's equipped, can't see equipment stats when shopping), enemies sometimes try to cast spells without having enough MP, pretty boring main villain, no 'miss' indicator on status spells