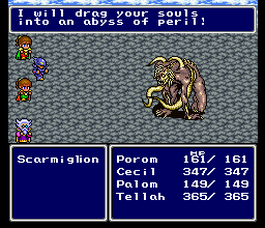 +/-
Specialized characters
Beaten characters stay dead after battle
Save points in dungeons (save anywhere in the overworld)
Grinding makes most battles easier (static difficulty)
Limited ammo for bows (kind of pointless and cumbersome)
Can't bring the rest of your allies to the final dungeon even though they all survived (parties are always formed automatically by the game and most characters leave periodically over the course of the game)
Active time battle (you can choose between active or ‘wait’ but the latter only works while in a Command sub menu during combat – time still passes while contemplating which command to pick),

-
​Very frequent random encounters
Can't run (move faster in the field)
Archaic menus (no time bar in battle (some actions seem to take longer), no explanations on equipment unless at the item menu (none at all for magic), need to re-enter menus when using white spells, ​can't use l/r buttons to browse, when shopping you can't see beforehand if you have something or if it's better than what you currently have)
Plot oddities (Tellan's dialogue in the underwater channel cave (says it's too dangerous, then reacts to your dark sword - however the trigger is finding Rosa in the desert town before), the party should've been prepared for the red wings on Yan's castle)
Trial & error (south west underground cave, trapped chests, Giant's control system boss, learning what some status spells look like when successful, multiple attacks per turn from some enemies, Gilbert running away, can't access the menu between battles in Yang's castle)
Healing spells are canceled if the target is killed after inputting the command (not directed at the next target, so the turn is wasted)
Some poor skills/spells (Prayer, Regen, Smoke)
Poor animation overall
Cliché plot devices (hero and villain are related (used previously in FF2), Yang's death scene, interaction between the king and Cecil/Cain isn't well done - he's obviously corrupt and the sequence doesn't really make sense considering the circumstances, only Golbeze (awakened) and Fusoya leave to meet the bad guy near the finale - bound to go wrong, villain lets the party live at Yang's castle (then blames Cain for some reason), girls are suddenly unable to fight in Yang's castle, )
Some backtracking out of dungeons (there’s a rare teleport item which doesn't always work – scientist’s tower for example)
​Plenty of dead space, nobody reacts to Cecil turning into a pig, Yang loses his equipment while outside the party and possessed by Golbeze, Cecil magically knows about Dark Elf if you go see Gilbert before the clerics in Taroia, no world map on the overworld (makes it hard to find the next area to progress at one point in the game (surface dwarf village - the only clue (given by the king's spirit?) is useless - says to go to the land of the phantom beasts), limited inventory (helped by fat chocobo storage but it's still annoying when shopping for new gear), seriously rushed mourning scene after Cid’s passing, the dwarves on the surface don't react at all to what's happening at the crater next to their village, another scripted scene which is poorly hinted at is the one where you're supposed to find Cid in the dwarf castle to progress (lame plot device has you falling down a trap door right before the crystals then finding an airship which can't cross lava - ships can park several floors up towers in cutscenes but not manually), pretty repetitive dungeons, uneven difficulty, memory cursor doesn't work?, Zeza's death (idiotic)