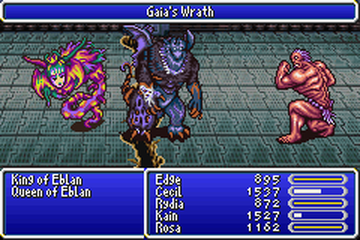 
+
Faster walking speed
Interface improvements (ATB bars are now visible in battle (easier to see whose turn is coming up next), you can now choose not to grab specific loot after battle, use L/R to switch between characters in the menu, choose the amount of an item to buy in shops, "equip best" feature, everyone can defend now (press right during battle) and you can escape from battle by pressing L+R, item inventory sorting, can see how many of an item you have in shops, don't need to re-enter the party menu when re-using white magic spells anymore, )
Somewhat improved graphics (colours, backgrounds, new character portraits which show during dialogue)
New intro
Re-translated (second one since the PS1 version
Some more backstory at the beginning for Kain, less wordy in other parts)
New content (weapons, abilities, an option to mix up your party after a certain point toward the end of the game instead of being forced to stick with the usual Cecil/Kain/Edge/Rosa/Rydia crew, new sidequests and dungeons (personalized "trials" for every character and battles with "Lunar" versions of Rydia's summons (Lunar Ruins; see Dark Aeons sidequests in FFX International))
"Easytype" Zeromus sprite appears as a new boss called Zeromus EG, a bestiary)
Decent variation
Some decent humour (the dancing girls, ‘spoony bard’, Cid)
Pretty fast paced battles overall (some delay before some actions), unusually dark themes (main character is a knight under a corrupt king that he’s beginning to question, ends up burning a village down and then saving a summoner girl from said village - drama ensues), mounts and vehicles (chocobos, air ships, land speeder), re-uses most of the cool spells (blink, osmosis, summons, warp (wipes out weaker enemies), teleport (out of battle or to the previous floor), reflect), hidden items and paths, change weapon/shield during battle, developers' room, five (!) main characters sacrifice themselves, memorable moments (the airship chase scene, interplanetary travel, Edge's parents' fight scene, ), decent dialogue (re-translation based on the PS1 port), nice ending, some memorable characters, Ethers are back, dungeon architecture is a bit more complex than before, Toad and Mini are no longer instant death spells when used against enemies, Yang no longer loses his equipment while outside the party and possessed by Golbeze?, Sight or dwarf bread (rare) lets you see the world map (you can browse all visited locations), easier to escape than in FF3, somewhat more tactical battles (if you immobilize an enemy group's leader it can't give orders to the others, more mixed groups of enemies and more of them use status spells), better weapon variation,

+/-
Specialized characters
Magic is learned automatically when a character levels up (check a guide to see the progression)
Save points in dungeons (save anywhere in the overworld)
Grinding makes most battles easier (static difficulty)
Limited ammo for bows (kind of pointless and cumbersome)
Parties are formed automatically by the game and most characters leave periodically over the course of the game
Active time battle (you can choose between active or ‘wait’ but the latter only works while in a Command sub menu during combat – time still passes while contemplating which command to pick, ATB also makes each character move right after you've selected a command instead of waiting until the entire party's been given orders, you also can't skip to the next character in the order to make a character delay an action)
Beaten characters stay dead after battle
Spell charges were replaced by MP
Can't dual wield weapons
Enemies can run away again (but they usually don't), you now drop some money at times when running away from enemies, limited inventory (helped by fat chocobo storage but can be annoying when shopping for new gear), five man party, can't use esuna outside of battle, starts out and is mostly very linear (opens up a bit about a fourth of the way in when you get the airship with three optional locations to visit before getting the Earth crystal), more limited row changing than in FF3 (3 in the back and 2 in the front or vice versa) but you also only need to use one character's turn to change the entire party's formation, dead/petrified party members don't gain experience after a battle (more experience is giving to living members as well as characters not currently in the party), some actions take longer to prepare in battle (for example cure spells go before summons even if selected after them), Toad is a bit overpowered here too, no churches/resurrection springs?, no manual escape sequence, can't buy most spell attack items, raisable (but not lower-able) encounter rate using the Siren item (pretty rare)

-
Still has very frequent random encounters
Some control lag at times (mainly during battle but also for certain actions like using a potion on a character) and the game occasionally pauses for ~.3 secs during intense moments in battle which makes button presses not register (pretty tedious and it's at its worst during the final boss fight)
Need to grind before the final boss (big bang attack can do 2.5k damage)
No explanations on equipment unless at the item menu (game only shows if a piece is better or worse for a char in shops; they did add magic descriptions but not in battle)
Some slow scene transitions
​Keep/remember option for the menu cursor doesn't work in battle (neither for commands nor selected targets)
Some interface issues (need to equip weapons in battle to use them as items - browsing through the menu to equip and remove for certain battles can take a while, still hard to tell if a status spell affected the enemy target or not, can't see MP on the main battle menu, can't use L/R to browse inventories or other menus, can't equip from the shop menu)
Some plot oddities (Tellah not noticing Cecil's dark sword if you meet him before going to Kaipu (the trigger is finding Rosa in town beforehand), Rydia somehow lost her Titan summon after passing out, the party should've been prepared for the red wings at Yang's (Fabul) castle (their bombs also should've done more damage to the castle), nobody reacts to Cecil turning into a pig in Mysidia, Cecil magically knows about Dark Elf if you go see Gilbert before the clerics in Taroia, no town reaction to you opening the path to the underworld, the dwarf descendants on the surface don't react at all to what's happening at the crater next to their village, the party does nothing when Golbez is reduced to just a hand in the dwarf castle and steals the crystal there, seriously rushed mourning scene after Cid’s passing (and no mourning after Tellah))
No journal/log feature and you can't memorize keywords like in FF2
​Poor animation overall
No "remove all equipment" feature, can't use items on NPCs like in FF3 (except in certain scenes where the inventory pops up automatically), some backtracking out of dungeons (Warp helps but only teleports you one floor back per cast, there’s a rare teleport item which doesn't always work – scientist’s tower for example), plenty of dead space, can't group target a specific enemy type like in FF3, healing spells cast after all enemies are defeated are skipped, some poor skills and spells (Poison, Prayer, Recall, Regen, Smoke), no dungeon maps, trial & error (reflect doesn't work against a previously reflected spell nor against summons, when you're supposed to find Cid in the dwarf castle to progress (lame plot device has you falling down a trap door right before the crystals then finding an airship which can't cross lava - ships can park several floors up towers in cutscenes but not manually), hidden/unmentioned stat boosts from items, finding some hidden paths, trapped chests (can't escape from these monsters), finding the surface dwarf village (land of the phantom beasts the only clue?), learning what some status spells look like when successful, multiple attacks per turn from some enemies, south west underground cave location, Giant's control system boss, Gilbert running away, can't access the menu between battles in Yang's castle), still pretty repetitive dungeons overall (one exception is Sylvan cave with its poison tiles), uneven difficulty at times (the attack on Baron castle after Cecil becomes a paladin is pretty easy, magnetic cave has two save points, elbon castle enemies are tough considering when it's made accessible), some cliché plot devices (hero and villain are related (used previously in FF2), Yang's death scene, interaction between the king and Cecil/Cain isn't well done - he's obviously corrupt and the sequence doesn't really make sense considering the circumstances, only Golbeze (awakened) and Fusoya leave to meet the bad guy near the finale - bound to go wrong, villain lets the party live at Yang's castle (then blames Cain for some reason), the female chars are suddenly unable to fight in Yang's castle, ), can't buy back an item from the store you sold it to unless it was already in stock there, healing spells are canceled if the target is killed after inputting the command (not directed at the next target, so the turn is wasted), stealing fails too easily, unskippable in-game cutscenes, Kain loses (it's replaced) his equipment when he turns again in the mid-game,

Bugs:
http://www.gamefaqs.com/gba/929937-final-fantasy-iv-advance/cheats
-There's a minor bug with item stacking forcing you to use the Sort feature instead of manually stacking items or you'll get new stacks when buying more of an item,
Fixes in the PAL ver.: No double turns for the party or enemies, Moves (both yours and the enemies') go through more as intended (no four turn wait for Jump and such), Menus are more responsive (not completely fixed, but now a rare occurrence), Screen jitter has been reduced, Back row weapons work (their accuracy was cut before), Gilgamesh->Gil Turtle, Yang's HP cap (lvl 60) is gone