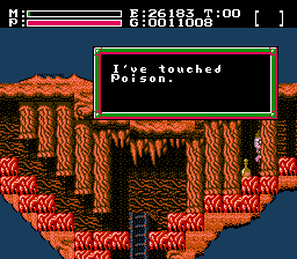 -
Trial & error (one dead end dungeon in the tower of mist area, can't physically attack enemies inside the houses in the misty area, if your inventory is full when picking up the mattock then it disappears (even though the game says that you've picked it up) and you can't get it again, various mechanics (there is some subtle movement acceleration that you might not notice at first and which is needed to make some jumps), can't go back into the first town after exiting it)
Some cheap hits (the rock dropping enemy, some enemies near ladders, spawn points that are too close to where you entered the screen, enemies behind the foreground, etc.)
Tedious lock and key system (can only buy one key at a time and they're not dropped by enemies or found anywhere else, can't sell a key unless you're in a key shop selling that kind of key, a locked door is relocked after opening it and the key is wasted)
Dated interface (need to manually equip keys as items and use them on locked doors to open them, no/lacking item descriptions in-game, shop dialogue resets after every purchase, can only buy one thing at a time, slow text speed (can't speed it up, only cancel it)
Some control problems (can't attack while on a ladder, near impossible to fit into 2x tile vertical spaces while flying (the game even teases you with a red potion at one point), super fast falling speed, glitchy physics at the top of ladders (need to tap the button slightly to make the avatar end up in standing position - need at a certain point unless you want to use wing boots or die), can't jump forward right after swinging your sword, can't jump straight down through ladders, no jump height adjustment, can't turn around in mid-air, limited mid-air control)
Somewhat easy to miss useful hints from NPCs (need to talk to some of them twice or more)
No journal/log feature
No in-game map
Can't sell weapons/armor/shields (would've helped a lot with reducing grinding)
Some translation errors (martial arts and magic "lessons" just refill HP and MP respectively)
Some grinding required if you want to be able to get the best gear as you encounter it in towns
Safe spot against the first wyvern and the first serpent
The mattock simply works like a key to a door (could've been used for puzzles like in Alex Kidd or Solomon's Key)
Some screens with invisible walls at the screen's edge making it look like there's another path you can take
Breakable blocks respawn while the mattock is used up and you need to wait until mascon to buy a new one (then backtrack quite a bit if you want to get the expensive items you could buy early on in the game)
Impossible jump (?) on the way back from tower of mist dungeon to the guy who gives you the Ace key (need the wing boots or you'll have to backtrack through that entire area)
Some backtracking (can't buy keys in Conflate so you need to go back to get two K keys, then later on you need to backtrack to Conflate for a certain ring)
You'll still get health drops from enemies that drop them even if you're at full health (would've been better if it switched to gold)
Sloppy/unforgiving hit detection on poison bottles (need to jump over one on the way to Conflate)
The church in the second dungeon can't give you a password or increase your rank (inconsistent)
No sounds for jumping or attacking, Some poor color choices
The game pauses to tell you when a temporary bonus is gone (see Castlevania 2)
Uneven enemy difficulty (many enemies still have very simple patterns in the mid- to late game)
The final boss is super easy if you pick up the ointment two rooms before facing it (need a pair of wing boots though)
Most spells are too similar to each other


Notes:
-Points of damage: Hand Dagger - 5, Long Sword - 10, Giant Blade - 15, Dragon Slayer - 20.
If you have the Pendant these values are 4, 8, 12, and 16 respectively (due to a bug making the effects of the pendant apply when you don't have it instead of when you do have it - this means you might as well skip the Tower of Suffer dungeon).

-Note that you still take damage if magic attacks hit your shield while under the influence of Ointment, due to a glitch