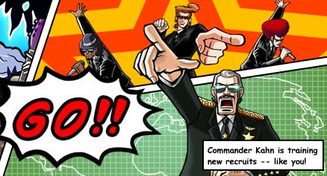 ​
+ Excellent presentation, easy to get into, difficulty options, unlockable tracks, memorable characers, well made comic book style cutscenes (skippable except for between checkpoints in songs), some of the mission scenarios are surprisingly touching, very comical and silly, ranking system (A-D with a graph showing missed notes), choose your own path through missions (2-3 new ones pop up after beating what was previously available), replay feature, the story in each mission changes depending on how well you play and it's pretty entertaining just to watch the characters fail

+/- You'll need a long stylus so as not to get your own hands in the way of the playfield (the numbers representing the beat you need to follow will pop up all over the screen and sometimes very rapidly, emphasising on memorization since the beat doesn't always follow the original track), rigid mechanics - there's no room for freestyling or doing any part in alternate ways

- Trial & error (you can't practice a song or watch how it's supposed to be played before having a go at it - this can be annoying because the rhythm you're supposed to follow won't stick to one instrument and sometimes a new beat is added to the original track),
song selection is hit and miss (the 70s and 80s songs are decent to good while the modern tracks are pretty awful and the 90s are underrepresented), no checkpoint save - It gets tedious having to play an entire song over and over because one part of it is giving you a hard time while the rest is cake (there could've been an option to save while making you lose the possiblity to get ranked), adding some frustration is the mechanic that makes your 'power meter' decrease when not hitting a beat - sometimes there's a pause between parts which causes very little room for error even if you did good previously in the song