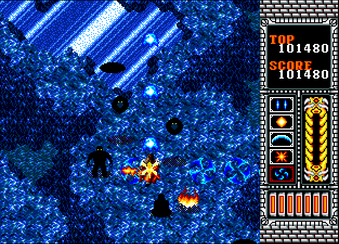 
+ Somewhat innovative gameplay (walk instead of flying, front and back attacks mapped to separate buttons, environmental hazards like wind & ice floors & fire storms etc.), boss and enemy weaknesses & you can choose your own path for the first four levels (Mega Man-style), difficulty options (star+a+b+c to access - easy to very hard, bosses behave somewhat dfferently in harder modes, no credits or lifebar length options), good variety, weapon inventory (TF2), technically impressive music, charge attack (gained with the second weapon - gain one new weapon for each beaten level up until level 5), fairy companion/gun drone (homing but damages weak flying enemies only?), clone trail power up (lasts until you get hit), upgradeable lifebar (from 5 to 8), shield power up (2 extra HP), pretty satisfying sfx overall (not quite on par with the TF series though)

+/- Life refill after bosses, you only have semi-auto fire until you get the last weapon, basic cutscenes between some levels, limited continues/credits (5 on Normal), can't jump and there's no dodge move

- Somewhat ugly cutscenes (poor palette choices and shading), a bit short (6 levels followed by a boss rush level with a few enemies in-between each one), walking on the ground can feel limited (you move a bit too slow and can't increase your speed which causes a few cheap hits), some trial & error (you need to know what weapon to use against some later bosses), most bosses go down too fast even on hard mode, the boss rush at the end is pretty easy because you've gained an overpowered charge attack beam at that point, you'll lose all collected hit points if you die (makes the game suddenly become harder from then on however you do get a chance to regain some HP during each level)